Wittmann Battenfeld announced a Virtual Fakuma portal to roll out technologies it had planned on debuting at the show originally scheduled for October in Germany, including presentation of videos in personal meetings with customers and web conferences. Videos will also posted to the company’s YouTube channel for public viewing.

The company is introducing the Ingrinder concept: a self-contained molding cell that continuously breaks down machine scrap inline. The Ingrinder concept includes an injection molding machine with integrated sprue picker, granulator and vacuum conveyor. The granulator and the sprue picker can be operated via the machine’s UNILOG B8 control system.

To display the system, Wittmann is deploying a servo-hydraulic SmartPower 60/210. The machine will mold a polystyrene can with a lid from a 2+2-cavity mold. A WP50 sprue picker with swivel drive removes the sprue after molding and passes it to the G-Max granulator integrated in the system. After granulation, the regrind is transported to the machine’s material hopper via a FeedMax vacuum conveyor. The Wittmann vacuum conveyor enables alternating conveyance of virgin material and regrind, resulting in a homogenous blend.

A Wittmann Battenfeld spokesperson told Plastics Technology that a G-Max 9 granulator, which is electrically interlocked with the molding machine, is utilized with a rotation speed of 200 rpm at 50 Hz and 240 rpm at 60 Hz.

Wittmann Battenfeld will also demonstrate a machine from its all-electric, high-speed EcoPower Xpress series. Targeting thin-walled packaging applications, the company will specifically run an EcoPower Xpress 300/1100+ equipped with the new Wittmann SONIC 131 top-entry robot, introduced at K 2019. Wittmann says the robot is well suited for applications requiring a robot cycle time from 4 sec. Using a tool from Italian firm Abate, the machine will mold a margarine tub from polypropylene in a 4 second cycle.

On the medical molding side, Wittmann Battenfeld run an application on a clean-room version of its MicroPower micromolding machine. A MicroPower 15/10 with 16 tons of clamping force will mold a miniscule retaining ring for miniature medical tubes. Molded from polycarbonate in an 8-cavity mold supplied by Austrian moldmaker Wittner, the retaining ring weighs only 2 mg. 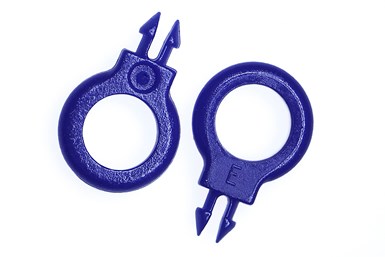 Micromolded on a MicroPower 15/10, these retaining rings weigh only 2 mg.

The MicroPower comes with a rotary unit, an integrated Wittmann W8VS2 robot and a camera for part inspection. The rotary table spins the mold and has two stations: injection and part ejection. Following removal and inspection, the automation system separates the parts out according to the cavities they were molded from.

For LSR, Wittman partnered with fellow Austrian firm Nexus Elastomer Systems GmbH to create a drink timer. A SmartPower 120/350 servo-hydraulic machine is running a 2-cavity cold runner mold from Nexus with its Flowset cold-runner control and Z200 metering unit with OPC-UA integration. Wittmann notes that the open design of the SmartPower’s injection unit eases integration of the LSR metering device. Parts are removed and handled by a W918 robot from Wittmann.

On the industry 4.0 front, Wittmann Battenfeld will showcase the TEMI+ MES (manufacturing execution system) from ICE-flex, which was recently upgraded. Wittmann Battenfeld noted that in addition to some minor modifications to the HMI, TEMI+’s underlying framework technology is entirely new, reportedly allowing for faster operator interaction and higher stability, including a Production Planner and the optional IMAGOxt package for graphical measurements such as energy consumption.

All Wittmann Battenfeld machines can be connected to TEMI+, which was specifically designed and optimized for the plastics industry. The system provides advanced OEE calculations and data integration of molding machines via Euromap 63 or 77, as well as auxiliary equipment via Wittmann 4.0/OPC UA.

The updated Production Planner enables adding and shifting production jobs via drag and drop, extended maintenance cycle planning, and a weekly job agenda. The optional IMAGOxt package creates graphs for energy or material consumption. Actuators and alarm responses can be programmed directly from the TEMI+ interface.

TEMI+ MES offers data integration of molding machines via Euromap 63 or 77, as well as auxiliary equipment via Wittmann 4.0/OPC UA.