Engel says the next generation of its e-mac all-electric machines features an optimized toggle lever geometry, making the new e-mac 265/180 nearly 18 in. shorter than the previous 180-ton version, without reducing opening stroke.

To showcase the machine’s performance at its market launch in October, the e-mac 180 will be demonstrated molding polypropylene pipette tips made from a 64-cavity mold built by Tanner (Feuerthalen, Switzerland), with a cycle time of six seconds. After molding, an Engel viper 20 linear robot removes the 64 pipette tips and transfers them to the integrated compact cell for cavity-sorted depositing.

All machine movements on the e-mac, including the nozzle movement and ejection, are performed by servo-electric drives. If required, a servo-hydraulic unit can be integrated into the machine frame without requiring additional space. 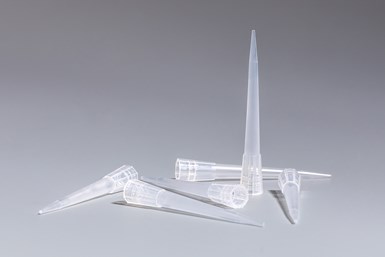 To launch the new e-mac, Engel created a cell molding polypropylene pipette tips from a 64-cavity mold in a 6-second cycle.

In addition to rethinking the machine line’s toggle, Engel says the injection unit on the new e-mac was developed “from scratch”, with better dynamics emphasized. The new injection units are available in three performance classes, allowing molders to tailor the machines’ capabilities and outputs to their specific needs.

Engel told Plastics Technology that the three injection unit performance classes are: Standard, High and Heavy Duty. The classes differ in terms of injection and holding pressure. Standard targets parts that don’t require fast injection speeds or pressures, while High is intended for thin-wall applications requiring a faster injection speed. Heavy Duty is geared for long and high holding pressure applications, like thick-walled lenses. “With this line up, we are able to offer a customized solution for every application running on our e-mac machines,” the spokesperson said.

Engel believes that for precision applications with cycle times of more than four seconds, the e-mac is a very economical all-electric injection machine option. Apart from medical technology, Engel says the e-mac draws interest in packaging, teletronics and technical molding.

Launched in 2012, the e-mac has five machine sizes available ranging in clamp force from approximately 55 to 315 tons, with the largest version launched at Fakuma 2017.

The new e-mac 265/180’s footprint is nearly 18 in. shorter than the previous 180-ton version, without reducing opening stroke.