For two-component molding, splitting the cube mold into halves that rotate in opposite directions provides thermal isolation and long cooling times for both materials.
#kshow

One of the most eye-catching tooling exhibits at K 2019 was the debut of the Reversecube from moldmaker FOBOHA. This system divides the rotating cube mold in half horizontally, with the two halves turning by 90° increments in opposite directions. The first commercial system was running at the show, molding and assembling a PP socket and an acetal (POM) roller for a Bosch dishwasher. The innovative 24 + 24 cavity mold ran on a 290-metric-ton Arburg Allrounder Cube 2900.

Top half of the FOBOHA Reversecube molds an acetal part at a much higher mold temperature than the lower half, which molds a thick PP part. The two halves turn in opposite directions to give two cooling cycles to both parts and eject them at the same station on the back side of the machine.

The rationale for splitting the cube is to thermally isolate the two mold halves, one of which is molding PP at a mold temperature of 15-20 C (59-68 F) and the other molding acetal at 80-85 C (176-185 F). What’s more, the PP part is relatively thick, so the mold was designed to provide each component with two cooling stations after injection, with the fourth station reserved for assembly and ejection. With the two materials injected into mold faces 180° apart, the only way to provide two cooling stations for each, and to eject on the same side of the machine, was to split the mold into sections rotating in opposite directions. In the fourth mold station (on the non-operator side of the machine), a six-axis robot demolded the parts while assembling them with a snap fit. In this way, the same cavities and components are always combined, making it easier to track problem cavities.

The result, says FOBOHA, is 20% higher output, up to 40% shorter cycle time, and around 40% less floorspace than a conventional system. The single machine system replaces four standard injection molding systems and two assembly lines. (See it in action at short.ptonline.com/RevCube). 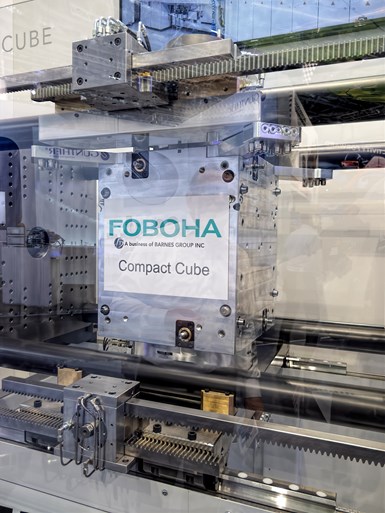 New FOBOHA Compactcube is a simplified system that drastically reduces maintenance time and can be used in a standard machine with extended stroke.

FOBOHA also introduced its Compactcube, a simplified “plug-and-play” system for use on standard machines with extended stroke. The system is tailored for shorter runs, because it cuts the time for mold removal and maintenance from five days for a conventional cube mold to a single day. That’s because the Compactcube has no top and bottom shafts for media supply. Instead, there’s an integrated shaft and housing for media supply to the center block. This cube is mechanically driven, like a stack mold, rather than hydraulically or electrically driven like a standard cube. The new system is currently available for machines from 120 to 450 m.t.