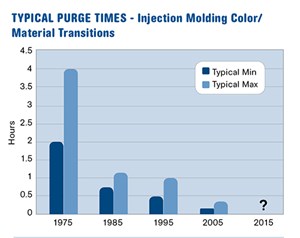 Not Your Father’s Purging Agent
There are two important messages for today’s processors with regard to purging. First, as we near the peak of the “rapid improvement” stage of purging technology, the products now available are not the same old purging compounds of the past. Second, the “low-hanging fruit” has been picked—future technical improvements will likely be incremental and future improvements in productivity will require a shift in focus, toward transition planning and process optimization.

Chemical Purging: When and How to Do It Right
Extrusion blow molders are sometimes skeptical of chemical purging compounds (CPCs), and they have a point.

If You've Tried Purging Products In The Past and Were Disappointed, It's Time You Read This!
You’re not alone.

Four Ways to Fight Sky-High Resin Prices
There are lots of ways to economize on resin costs, but here are four that you may have overlooked: negotiating smarter resin contracts, buying “futures,” using recycled resins, and more efficient purging aids. The main idea is to give yourself more choices, no matter what direction resin prices go.