Purer Grade of ABS Makes for Better Parts and Processes

ABS (acrylonitrile butadiene styrene) made with the mass polymerization process offers an array of benefits beyond what you’d expect from this venerable material. Whiter, purer, easier and oftentimes less expensive to process all add up to a high-value engineering resin.

ABS has been around a long time and for good reason. It’s durable, tough and relatively inexpensive. It works well in multiple processes including injection molding, extrusion, 3D printing and especially thermoforming. ABS can be fabricated in its natural color or with a color additive, and thus lends itself to a wide range of opaque applications. So, it’s no wonder that ABS is still a popular solution in a wide variety of applications such as toys, device enclosures and automotive parts.

What many plastics processors may not know, however, is that all ABS is not made the same. ABS made with a process called mass polymerization results in what’s sometimes considered a higher grade of engineering resin. That difference can result in substantial advantages in injection molded, extruded or thermoformed component properties in addition to oftentimes a lower cost to manufacture those parts. The enhanced properties offered by this material include:

Because of these enhanced properties, mass polymerization ABS is widely used in automotive, medical devices, consumer electronics, and high-end extrusion and thermoforming applications, such as with housings and enclosures that require advanced performance and aesthetics.

Traditionally, ABS has been made with a multi-step emulsion batch reaction process. The result is that there can be significant variability in the material from batch to batch. Perhaps more consequential, the emulsion process requires the use of several processing additives such as emulsifiers and salts. Impurities from the additives typically remain in the finished material in detectable levels, which contributes to the resin’s yellowish tint.

Emulsion polymerization uses a batch reaction process requiring emulsifiers and salts that remain in the ABS at detectable levels.

This difference is exemplified in the line of MAGNUM™ ABS resins from Trinseo, a former business of The Dow Chemical Company, and global manufacturer of plastics, latex binders, and synthetic rubber. Using the mass polymerization process, MAGNUM™ ABS resins are known for greater color stability, thermal stability and for providing a purer ABS resin.

Morphology of Mass vs. Emulsion

Morphology is the result of in situ formation of rubber particles during the SAN matrix polymerization. Pictured below are examples where:

eABS: rubber particles are smaller and dense because they are in essence produced in a separate process (rubber latex and GRC production) from the SAN matrix polymerization. This allows a higher control on the rubber particle size and hence the possibility to produce smaller rubber particles, which can be beneficial in case one seeks the highest gloss levels.

The most striking feature when you see MAGNUM™ ABS in its natural state is how white it is. Because there are fewer impurities, the material is much brighter than conventional ABS, and stays whiter longer, even through multiple regrinds. You can add whitener to lighten conventional ABS but will not be able to reach the level of whiteness that can be achieved with MAGNUM™ without using any additives.

This low, base color allows the processor to use less pigment yet still achieve a rich color with the end result, particularly with lighter colors. Being able to color parts closer to the target aesthetics with less pigment brings significant cost savings to plastics processors. It’s also easy and cost-efficient to use masterbatches, enabling smaller lot production in different colors. Adopting self-coloring allows processors to avoid managing multiple different lots of colors.

A disadvantage of emulsion polymerization is all the residuals that remain in the material. The result is ABS with measurable levels of impurities, VOCs and gels and that can negatively impact downstream processes as well as the final product. As this VOC graph shows, when compared with emulsion ABS (eABS), ABS produced with mass polymerization has substantially lower volatile organic compounds.

Residuals and impurities may intensify the aging process in injection molded parts, losing their color and finish sooner. Higher levels of VOCs raise regulatory concerns, create swirling residue in the extrusion process, and raise the odor level of finished parts, not to mention odor in places where those parts are processed. Ultimately, Pure ABS-type products with less VOCs will cause less odor nuisance for the operators and end users.

Pure ABS with low levels of VOCs will also result in a pure and clean surface after extrusion, which may improve adhesion properties for lamination and gluing or coating. For bending operations, high molecular weight, more efficient use of rubber and more efficient coloring can reduce so-called stress whitening, and allow for sharper bending radius.

Gels, also referred to as unmelts, become a problem in the surface quality of parts, particularly in sheet extrusion. Gel particles do not melt during the extrusion process and can lead to several surface irregularities. In relatively thick sheets, these irregularities may not even be noticeable, but can appear in a secondary process—such as in thermoforming—creating visible imperfections on the surface of the part. These can be more noticeable if they are located very close to the surface of the sheet (see below), or in cases where a high-gloss acrylic cap layer is co-extruded.

Being more visible after extrusion and even more so after thermoforming, this can be a major issue with products such as automotive interior trim, or with furniture applications where the extruded film is directly laminated/glued on to wooden boards.

The majority of extruded sheets and film contain several layers of ABS applied by means of co-extrusion, with many co-extruded layers as thin as 30 microns. Below demonstrates how gels present in the co-extruded layer are more visible than gels in the core layer.

Pictures on the right side show how the gels cause surface defects (top view of the sheet surface), and the cross sections microscopy pictures show the location and size of the gels.

Because the mass polymerization process never introduces many of these contaminants to begin with, MAGNUM™ ABS exhibits fewer of these issues. A purer ABS also reduces the likelihood of substance migration from the plastic, which is particularly important in sensitive applications such as with medical devices.

Better Stability In-Process and Over Time

Another benefit of the mass polymerization process is that it yields a material that is more thermally stable. MAGNUM™, for example, can be processed at temperatures above 250°C, which—combined with its low melt temperature—offers an exceptionally wide processing window. Good thermal stability also results in less color shift, which is important to injection molding shops running the same part across different machines.

This image shows how granules change in color after various re-extrusion passes. Pass 1 is the original granule color. The yellow of the eABS is clearly more pronounced than MAGNUM™. Further, MAGNUM™ shows less discoloration over the number of regrind passes, demonstrating higher thermal stability.

Compared to emulsion ABS, MAGNUM™ thermoplastic material has an improved resistance to UV light such that less UV additive is needed to stabilize molded, extruded and thermoformed parts. In accelerated QUV-A weathering tests, the material demonstrated a 50 percent slower aging rate than conventional ABS. This means parts retain their color and surface appearance longer, which is critical for materials exposed to sunlight.

This graph shows the evolution of the delta E value when exposed to a QUV-A accelerated weathering test. The delta E value is a numerical value that expresses the total color change compared to the original color before the test. The emulsion ABS color ages twice as fast as the MAGNUM™ ABS. That means, in theory, that MAGNUM™ ABS needs about half the amount of UV absorber compared to eABS for indoor exposure conditions.

MAGNUM™ ABS resins also offer an excellent balance of features such as toughness, extrudability and surface aesthetics required by demanding standards in the furniture industry. Since ABS is an ideal product for several opaque applications, this makes it a great candidate for edgebanding.

In particular, MAGNUM™ ABS Resins feature the key performance properties required for edgebanding—strength of durability and impact, stain, and moisture resistance. Because these resins are produced without the use of chlorinated ignition resistant additives, the result is an environmentally-friendly alternative throughout the material’s lifecycle including incineration that has made Trinseo’s ABS a material of choice.

These resins’ material formulation provide unique low and consistent base color alongside high color stability after processing, allowing for easy color tuning for edgebanding producers. This is vital for converters, who oftentimes produce several hundred combinations of color and embossing, often in small order sizes.

Edgebanding requires an extruded process that goes through lamination before being sent out to end product users.

Here are a few other examples of ABS extrusion applications.

The sheet extruder, in some cases, does not supply directly to the brand owner but to the thermoformer. The transformation from granules to end product goes through two distinct different processes, each that have their own ABS resin attributes: the primary process first is sheet extrusion and the second is thermoforming.

ABS produced with mass polymerization technology has significant visible advantages.  While mass ABS is certainly a popular option, this isn’t to say that it is the ideal choice in every scenario. Emulsion ABS has historically performed better for plating applications, for example. While MAGNUM™ ABS can be supplied in a wide range of gloss levels, applications demanding the highest gloss levels may benefit from the emulsion method.

MAGNUM™ ABS inherently has a low base color and is very consistent whereas emulsion ABS is produced in a smaller batch process and is expected to be less consistent from lot-to-lot. However, if your need is for smaller custom lots of material, emulsion ABS may be a consideration.

While well known in the automotive industry, Trinseo is continuing to grow as a strong presence in several other markets. Trinseo was formed in 2010 by combining four businesses of The Dow Chemical Company:

Today the company has over 2,000 employees in 25 countries with a global footprint that includes 15 manufacturing sites and 10 R&D labs across the world. 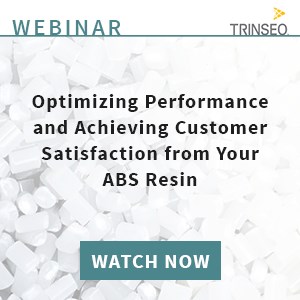 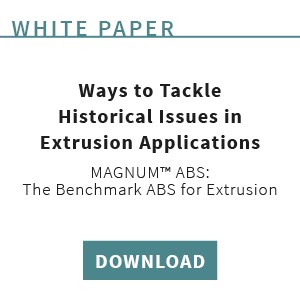 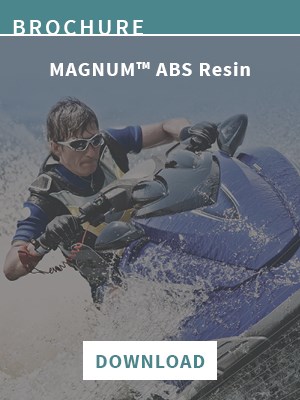