‘Game Changing’ Flat Die Lives Up to Its Billing

Revolutionary ‘touchless’ die and control system for cast film and coating/laminating offer speed, efficiency and operational efficiencies to processors that were previously ‘unheard of.’
#dies #closeupontechnology

A new flat die and control package billed by its developers as “revolutionary” and “game changing” is proving to be just that. After some three years in development, the Reflex die for cast film and coating/laminating was officially unveiled at last October’s K 2019 show in Düsseldorf by Cloeren Incorporated, which has sold nearly 100 of the dies worldwide, including about 30 units teamed with Windmoeller & Hoelscher’s Die Control Wizard (DCW) operating in what’s called “touchless” mode.

One such die and control package has been in operation since March 2019 at the Searcy, Ark., plant of extrusion laminator Bryce Corporation. The Reflex-DCW combination, retrofitted on an existing line, has thus far resulted in a 50% reduction in total yield loss, 80% reduction in belled/soft edges (Fig. 1), and a more than 50% reduction in setup time (Fig. 2), remarks Andy Pratt, Bryce’s v.p. of operations support. Bryce was so impressed with the new die and control package that it has since ordered two more systems for its Memphis, Tenn., operation.

Bryce is a leading provider of flexible packaging and prepress solutions to leading and well-known global consumer-products companies. It is a primary or secondary supplier to brand owners of all sizes in the snack-food market, a major supplier to the top three brands in confectionary goods, and a leading supplier to the top three brands in pet food. Bryce produces more than 150 million preformed pouches annually across these markets.

Growth strategies for Bryce include applying its technical capabilities for its historic core markets to new and adjacent end-markets. Active customers and new projects include health and beauty, frozen food, dried fruit, condiments, dry foods, bars, soups, sauces and lidding. Bryce laminates a wide range of substrates with various polyolefins as well as barrier materials. The Reflex die in Arkansas has can extrude up to five layers.

The combination of the Reflex-DCW offers processors what Cloeren and W&H call “touchless” technology. Pratt can attest to the veracity of this claim. “This is the biggest advancement in extrusion lamination in 25 years,” he says. “It was installed, we made a few tweaks, and we were quickly making commercial product. In the time since, we have not touched a single die bolt. Not once. That is unheard of. It outperforms anything else we have had and is easier to operate. Training new operators is more efficient because they have an opportunity to learn how to operate the line with the die in automatic mode before being transitioned to another line where they learn how to control the die profile. This system has allowed our operators to focus more on quality rather than continuous manual adjustments on the die back and forth.”

FIG 1 Reducing the time between product changeovers at Bryce, attributed to the Reflex-DCW package,also had a significant impact on quality.

While Cloeren designed the die primarily for cast and stretch film, it was also looking for a “launch customer” to bring the die and control system to the extrusion coating market. Cloeren and Bryce—both family-owned companies—have been working together through three generations of ownership.

“Since March 2019, we have not touched a single die bolt. Not once. That is unheard of.”

Pratt elaborates, “In the spring of 2018 I knew that Cloeren was working on a project to build an automatic die for a cast film line in Germany. (Cloeren CEO) Peter Cloeren started talking to me about this, and he knew Bryce was the partner to bring it to the extrusion-lamination market.
We have partnered with Cloeren on several innovations for more than 20 years. Many years ago, we bought their first combination adapter. Cloeren gave us feedback on the production capabilities of the new Reflex die, which was first installed on a cast-film line. We visited their facility and reviewed the design of the new die tailored for extrusion lamination and decided to partner with them to install and test the die on one of our lines.  Because of our position as a leader in extrusion lamination for food packaging, Cloeren wanted to bring the first the first Reflex die and DCW to this market with Bryce.”

FIG 2 Bryce makes a lot of product changeovers, and the time it takes to execute them has been dramatically reduced since the extrusion laminator retrofitted a Cloeren Reflex die with a W&H Die-Control Wizard in March 2019.

The benefits offered by the new die and control package are particularly critical to Bryce, which runs around the clock and makes as many as 30 job changes/week on the Reflex-DCW line and is always looking for ways to increase efficiency.  Said Sean Bowie, president of Bryce’s packaging division, “We are constantly seeking continuous improvement, and partners like Cloeren have helped us push the envelope in the converting industry.”

A Die is Born

The initial push for a truly automatic die emanated from Europe, where cast-film processors routinely push for more automation and less operator involvement in controlling gauge, states Peter Cloeren. “Our OEM customers were telling us, ‘We need a die with more capabilities.’ We would reply, ‘We need a control system with more capabilities.’ W&H responded by developing the DCW. In 2017, Cloeren installed the first Reflex die in the W&H cast-film laboratory line in Lengerich, Germany.

On the hardware side, Peter Cloeren says the Reflex represents “a complete mechanical and thermal redesign that results in a response that is twice as fast as previous technology. It also provides an adjustment range that is 1.6 times more than existing technology.” Major thickness changes that traditionally took 30 min to execute can now be accomplished in about 3-5 min under control of the DCW.

In addition to automatically adjusting for thickness variations, the die and control package make touchless width changes in as little as 17 min. roll to roll. “Changing widths could take as long as 2 hr in some cases, and that’s all downtime” Cloeren says. “In the Reflex-DCW setup, the thermal bolts on the die lip clamp and seal the deckles. The thermal bolts provide the clamping force at the touch of a button, with no other manual intervention. The software then unclamps the deckles, makes the desired width change, then re-clamps. All of this is done with the line running—at thread speed. When everything is re-clamped, the line ramps up automatically under the control of the DCW. This is a huge milestone.”

“Width changes are made with the line running—at thread speed. When everything is re-clamped, the line can ramp up. This is a huge milestone.”

Daniel Diekbreder, a W&H extrusion process engineer in Lengerich, who was involved in the development of the DCW from the start, notes. “There were several reasons for the development of the Die Control Wizard, but I think one of the most important things was that we wanted to eliminate one of the most complicated and time-consuming things you needed to do in the extrusion business: the alignment of the die-lip gap and moving deckle blades to adjust die width.

“Today’s business is influenced by more and more product changeovers—recipe, resin, film width, thickness, etc.—and all of these changes can require frequent die-gap alignments and die mapping with the gauge head when using a conventional die. Unfortunately, badly aligned die gaps will have a negative influence on film quality and consistency, creating massive amounts of scrap, decreasing your productivity and line efficiency. Combined with the fact that it’s getting more and more difficult to find skilled operators for the workplace, W&H and Cloeren collaboratively searched for a way to develop a system that runs without any manual interaction between the operator and the extrusion die. 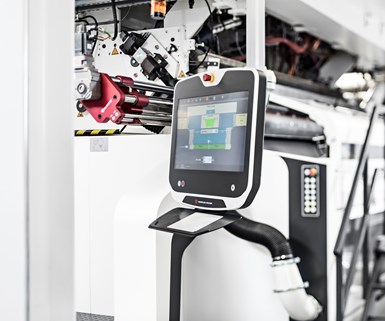 W&H Die-Control Wizard, in conjunction with Cloeren die (background) offers processors the ability to dramatically decrease the time it takes to make thickness and width adjustments.

“The idea of a touchless system was already born several years ago, but the first trials using standard dies or other systems equipped with robots were not good enough to fulfill all of our demands to create a fast and reliable system. It took two years of extensive collaboration and development to synchronize the extrusion process with the new hardware and software. But we figured out that all common structures in today’s cast-film business, including stretch, high-barrier and cast PP film can benefit from the touchless operation of the Reflex die and DCW.

“W&H mainly focused on improving its Procontrol line-control software to integrate common situations, like a change of the die width, a resin change with different melt index, and the thickness-gauge mapping procedure, so that finally all of these activities can be done easily using only the touchscreen and without any need to physically touch the die. This should enable all operators with varying experience and skill levels to easily handle these operations consistently and efficiently.”

Cloeren provides the touchless system combining Reflex and the DCW on a turnkey basis for retrofits. The combination is also available on all new W&H cast installations. Cloeren also furnishes the Reflex die on a stand-alone basis. Peter Cloeren says he has yet to test the die on sheet, but believes these processors would receive the same benefits as those in flat film and coating/lamination.