At the China Composites Expo 2020 (Sept. 2-4; Shanghai), Engel will highlight its thermoplastic based organomelt composite technology saying it represents the “answer to sustainable transport.”

In the organomelt process, thermoplastic fiber composite prepregs based on thermoplastic fabrics and unidirectional (UD) fiberglass or carbon fiber reinforced tapes are heated in specially developed infrared ovens. That composite component is then placed into the injection mold by a robot, where it is formed and functionalized in a single step. By using injection molding, Engel notes that reinforcing ribs or assembly elements can be overmolded directly. Since the structure consists entirely of thermoplastics, its end-of-life options do not preclude recycling. 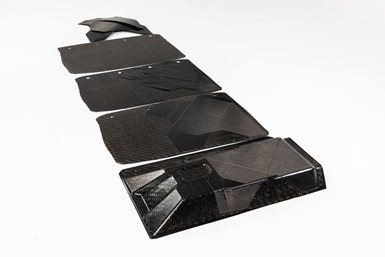 Engel’s production cells integrate all processing steps for composite parts, starting with individual tapes all the way through to “functionalization” via injection molding.

Engel says the process is continuously under development, and at present, the company is investigating the combination of several different prepregs—thermoplastic fabrics of different thicknesses or UD tapes—in a single component to create areas with varying levels of rigidity based on the mechanical load they’ll see in the field.

To demonstrate this at the expo, Engel is showing a door structure developed in partnership with automotive supplier Brose. In this application, three thermoplastic fabrics with thicknesses between 0.6 and 2.5 mm are processed. The different loads on the individual component areas are optimized for their role in the part so that the door structure is more rigid around the window frame than on the inside of the door, for instance.

On the more traditional thermoset side, Engel will demonstrate how production efficiency can still be improved even for long-established technologies. On display will be the rear seat panel of the Audi A8, which has a complex carbon fiber structure and local reinforcements. Series production is by a supplier from Germany using an Engel v-duo 1700 machine with the fully automated HP-RTM (resin transfer molding) process.

The spokesperson said there are several organomelt applications running in high volume currently, with more projects in evaluation. The very first large-scale production project was launched in Tennessee to create front-end carriers with integrated air ducts.

The tape laying unit developed by Engel can deliver tailor-made prepregs for its organomelt process in a one-minute cycle time.