Global bioplastic production capacity is expected to increase to 4.8 billion lb by 2024, driven by OEMs and brand owners steadily converting applications to these “green” materials. If you’re looking to supply compounds to meet this demand, here are some key processing considerations you need to know.

Biopolymers such as PHA are expected to drive a growing demand for “green materials,” with some sources projecting that capacity will more than triple over the next five years. PHAs are biobased polyesters that are biodegradable and offer good physical and mechanical properties.

Plantic Technologies Ltd. of Australia (now owned by Kuraray) is considered one of the pioneers in the industry, having worked with us on proprietary formulations. Today their patented biodegradable food-packaging materials are commercially successful and in use worldwide, produced on twin-screw compounding machinery. Danimer Scientific LLC, Bainbridge, Ga., is another leader in this field. Danimer makes biopolymer compounds used to produce a variety of environmentally friendly products. Its Nodax PHA line is experiencing significant growth; for example, Bacardi is using it to replace 80 million PET bottles (translating to 6 million lb of material) currently produced by the company.

Many new players have emerged in the biopolymer space with new materials and many new formulations. Co-rotating twin-screw extruders provide excellent material mixing capabilities for all polymers, including biopolymers. You should consider your machinery supplier as a development partner to achieve your goals in the areas of melt and mix quality, production rates, and other parameters, regardless of formulation. Make sure your machinery supplier has the facilities and the know-how to help you test material formulations and improve your processes.

As with any compounding project, a certain amount of trial and error is inevitable in process development for new biopolymer formulations. Some are successful from the start; others need more work to become commercially viable. 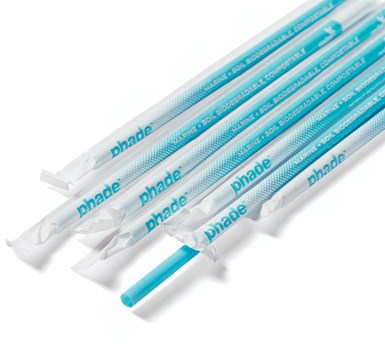 PHAs have been commercialized for a range of applications, including Phade-brand straws made of Danimer’s biocompound.

• Bioresin compounds containing bioresins such as PHA, PLA or PHB;

Here are some key processing considerations for bioresin compounds and biopolymer compounded blends on a co-rotating twin screw extruder:

1.  Buy flexible extruders: Design the equipment for maximum flexibility; purchase long extruders having 48:1 or 52:1 L/D, with multiple vent and feed location options. This is a rapidly evolving industry, with new ideas, new or improved feedstock materials, new or improved additives, etc. It’s much easier to open or close up an available vent location, or to add or remove a side feeder from an available location, than to purchase new barrels or extend the extruder after the initial capital purchase.

2.  Remember that biopolymers are typically hygroscopic: Plan for at least one atmospheric vent—sometimes two—and at least one vacuum vent—sometimes two. Biopolymers are typically hygroscopic and require cautious handling prior to processing. It is effective to place an atmospheric vent early in the extrusion process to minimize hydrolysis of the biopolymer and to avoid pre-drying of the materials. A vacuum vent is a requirement. Don’t think of a vacuum system as a non-essential add-on; it is an integral part of the extrusion process that is often the difference between making a quality product or not. A well-designed vacuum system that also addresses the often-corrosive nature of biopolymer volatiles pays for itself by reducing maintenance and downtime, along with increasing throughput rates.

A volumetric limit can be avoided by strategic placement of vents for air and moisture to escape, and by locating restrictive-type kneading blocks or reverse screw elements as far as possible downstream from feed openings or vents. High torque is avoided by designing the extruder screw with long, “gentle” mixing zones versus short, aggressive mixing zones. Stabilize feeders so that torque fluctuations are minimized, which allows the operator to run the extruder at a higher average torque.

The co-rotating twin screw extruder, although an effective and efficient mixing device, is only 8% to 15% efficient as a pump, which translates to a significantly increased melt temperature caused from a high extruder exit pressure. A high exit pressure can also cause vent flow at a vent near the exit of the extruder. Increasing the diameter of die holes, increasing the mesh size of filtration screens and, in the case of underwater pelletizing, increasing water and die temperatures, all work to minimize extruder exit pressure. Conveying screw elements with a pitch equal to one diameter are the most effective pumping elements.

Melt pumps can be used between the exit of the extruder and the die. Melt pumps have pumping efficiencies of 25% to 35%. Using a melt pump minimizes melt-temperature rise, conserves extruder power and creates a more stable flow of extrudate. The cost of a melt pump can sometimes be easily justified by increased extruder output.

4.  Biopolymers degrade rapidly, making purging important: Degradation of Biopolymers is more rapid than most petroleum-based polymers. It is highly recommended to lower the barrel heats or turn the heats off if the extruder is going to be standing for more than 1 to 2 hr. If the heats are left on for long periods while the extruder is not running, purge the extruder with a low-cost heat-stable polymer that has a slightly higher melt viscosity than the bioresin. If the viscosity of the purge material is too high, it can show up as contamination for many hours after starting up production again.

New compounds—biopolymers and others—often result from close collaboration between compounder and machine builder. Make sure your machinery supplier has the lab facilities to support R&D.

ABOUT THE AUTHOR: Dean Elliott has more than 20 years of plastics extrusion experience. He earned a BS in Mechanical Engineering from the University of Durban-Natal in his native South Africa. He rejoined ENTEK in 2017 after working for the prior three years at Interfacial Consultants/REV Materials of Prescott, Wis., where he led equipment installation projects and managed several strategic customer accounts. Prior to that, Elliott worked for seven years as ENTEK’s extrusion lab manager, where he led all customer extrusion lab trials and worked to help customers solve numerous processing challenges. He is the holder of two patents. Contact: 541-259-1068; delliot@entek.com; entek.com.