Prices of the five large-volume commodity resins were generally on an upward trajectory through at least the end of the third quarter, owing to a combination of factors including planned and unplanned capacity interruptions that limited feedstock and/or resin inventories, spikes in feedstock costs and, in some cases, strong demand. Approaching the end of the year, the trajectory appears to be flat with potential for downward movement for PP, PS, and PET that could result from improved supplier inventories, lower feedstock costs and slowed demand. Overall, plastics processors were expected to have greater leverage in negotiating 2021 contracts.

These are the views of purchasing consultants from Resin Technology, Inc. (RTi), senior editors from PetroChemWire (PCW), and CEO Michael Greenberg of the Plastics Exchange.

Polyethylene prices settled flat in October, despite suppliers’ efforts to push through another 5¢/lb increase, which would have been the fifth consecutive increase and would have brought prices up this year by 24¢/lb. The 19¢/lb of hikes implemented so far resulted from tight inventories due to planned and unplanned outages and strong demand, according to Mike Burns, RTi’s v.p. of PE markets, PCW’s senior editor David Barry, and The Plastic Exchange’s Michael Greenberg. Summed up  the latter, “Contract buyers are facing the same 5¢/lb increase nomination in November that did not take hold in October, and there are very few that currently seem worried.” 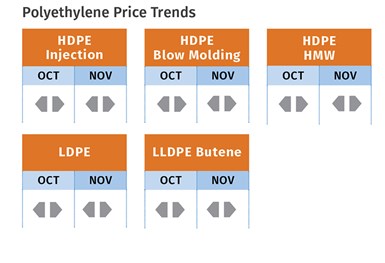 RTi’s Burns ventured that year-end contract price decreases were unlikely due to tight inventory levels and sustained demand. Still, he saw signals for some market conditions—including new capacity—that would allow processors to have some leverage in negotiating 2021 contracts. He also expected exports to return to their typical 40% market share as North American PE inventories recover.

In the first week of November, PCW’s Barry reported PE spot prices trending lower amid efforts to boost exports: “The tightest grades have continued to be blow molding HDPE and LDPE for some buyers, but spot availability was expected to improve. Suppliers viewed November as a month for rebalancing, with inventory pressure likely to emerge in December. In the domestic secondary market, demand was quiet, and there were widespread reports of customers destocking in October, as buyers anticipated 4Q price relief. Domestic prime demand was expected to remain healthy, especially for consumer packaging applications that have thrived during the pandemic.” Barry also noted that export offer volumes to China were 10% to 20% higher in November, and even more availability was expected later in the month as suppliers with inventory position for the year end, with prices under pressure.

Polypropylene prices moved up 0.5¢/lb in October, in step with propylene monomer, and there did not appear to be any implementation of the attempted non-monomer-related price hikes of 3¢/lb, according to Barry, Greenberg and Scott Newell, RTi’s v.p. of PP markets. In fact, Barry noted there was talk that some suppliers were pricing contracts more aggressively in a bid to secure sales volumes for 2021. All agree that domestic PP suppliers cannot afford to have the highest prices globally as competitive imports were already making their mark.

RTi’s Newell ventured that PP prices would drop this month, if not before the end of November, noting that any price moves would be linked solely to the monomer: “The balance of power is shifting from suppliers to buyers.”  He noted that things were starting to return to normal after an extremely tight market caused by planned and unplanned outages for both PP and monomer: “While the market was still tight through October, things were rebuilding slowly and price hikes were based on circumstances, not market fundamentals.” 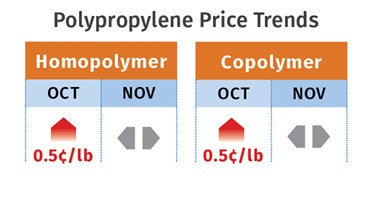 The Plastics Exchange’s Greenberg reported after the first week of November that PP trading remained strong but was still somewhat slower than the extraordinary demand in the last couple of weeks in October. “Slightly growing supplies still found quick homes in the happy hands of buyers; monomer prices held steady; and PP prices ended the week flat but firm. Some PP buyers ordered another round of imported material to offset insufficient domestic supplies, with deliveries extended out through the end of the year.”

PCW’s Barry characterized spot PP prices as largely unchanged while tight supply conditions prevailed. “Some loosening was seen in the wide-spec market, but spot prime offers were few and far between.” He said the latest Commerce Dept. trade data showed U.S. PP imports (including propylene copolymers) totaled 64.3 million lb in September, a 50% increase from 42.7 million lb the prior month and the highest level since March. PP imports were nearly evenly split between homopolymer PP and copolymers. Singapore and South Korea contributed the largest increases in import cargoes.

Polystyrene prices remained flat in October, but PS suppliers announced a 2¢/lb price hike for November, attributing it to higher benzene and styrene monomer costs, according to both Robin Chesshier, RTi’s  v.p. of PE, PS and nylon 6 markets, and PCW’s Barry.

In the first week of November, Barry reported that globally tight monomer supply resulted in a 7.5¢/lb jump in the U.S. Gulf styrene monomer spot market, with November transactions reported at 38.3¢/lb. Costs of both benzene and ethylene also spiked. Barry reported that the implied styrene cost based on a 30/70 ratio of spot ethylene/benzene was 21¢/lb, up 1.8¢ over a four-week period. PS spot prices were firm but with limited transactions. Both sources saw potential for PS prices to drop this month. 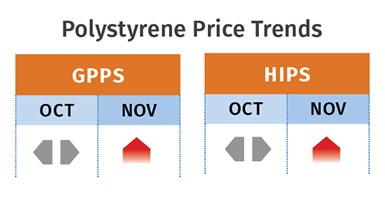 Chesshier thought 2-3¢/lb could come off as the PS market has not been growing, due to legislative bans and losing ground to PET and PP in the packaging arena. She did note that demand in the appliance sector has strengthened and appeared to be ramping up in automotive. She believed that processors would have leverage in 2021 contract negotiations.

PVC prices moved up a total of 12¢/lb between September and October, owing to tight supply from storm-related force-majeure actions as well as extremely high global demand, according to both Mark Kallman, RTi’s v.p. of PVC and engineering resins and PCW senior editor Donna Todd. They both saw November prices as flat. As for this month, Kallman ventured prices could remain flat or possibly decline a bit.

Todd reported that some market watchers expected PVC suppliers to announce another price hike for November, primarily to keep pressure on the market and ensure their previously announced price hikes would succeed. 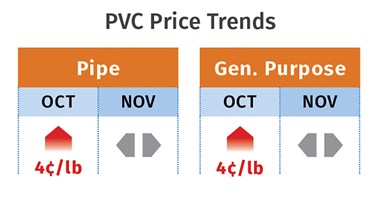 Both sources described the market as very tight, with Kallman noting that supplier inventories had fallen from the typical 10 days or more to under seven days by November. He expected continued strong demand from the construction sector and also ventured that resin production rates would increase from under 80% in September as capacity from unplanned and planned outages was restored by year’s end: “Expect to see both improved operating rates and the start of inventory rebuilding, which will give processors leverage in negotiating 2021 contracts.”

PET Prices Up, Then Down

PET monthly contracts ended October at 50¢/lb, up 4¢, the result of a surcharge tied by suppliers to increased feedstock costs. This was the result of storm-related unplanned outages, according to PCW senior editor Xavier Cronin. He predicted that by mid-November, prices of domestically produced PET for spot delivery would fall by a few cents. This would be partly due to a seasonal drop in demand for carbonated soft drinks and water, but also due to the abundance of imported PET—now from more than 50 countries, with selling prices in the mid-40¢/lb range, delivered to West Coast ports. 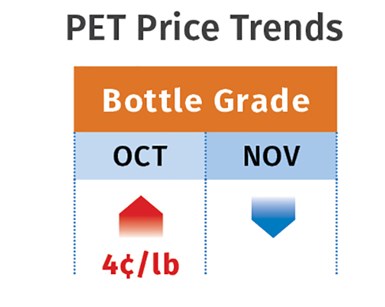 Still, he noted that PET demand for bottles, containers and packaging remains robust despite the seasonal slowdown due to demand tied to COVID-19—for example, bottled water for emergency workers and strapping tape for shipping medical and other supplies.