New ASTM Thickness Standard to Give Film-Quality a Boost

Non-contact standard can reportedly be carried out more quickly and precisely.

A new ASTM International standard will give processors a better test method for measuring the average thickness and thickness variability of film, and will likely result in an improvement in quality across the board. So says ASTM International member Rob Lawrence, a mechanical engineer at SolveTech Inc., which makes capacitance-based, non-contact gauging equipment. The standard (D8136) was developed by ASTM International’s committee on plastics (D20).

“The new test method is more accurate, precise, and easier to use than existing test methods,” says Lawrence. “The standard will help almost the entire chain in the plastic film industry, and it will likely improve quality throughout the industry.”

The new standard defines film thickness using a NIST (National Institute of Standards and Technology) traceable calibration. It also defines profiling, which is used to determine a film samples variability and average thickness. According to Lawrence, this approach eliminates many of the problems that resulted from the former standard, which relied on gauging technology that made contact with the film samples. For example, he notes that issues such as deformations, dust, and dirt on film samples using contact gauges can skew the reading, and data gathering tends to be slow and laborious. With the new standard, he says film users can accurately profile a film sample, characterizing their entire extrusion in 30-to-60 sec. (see photo)

Lawrence reports than an undisclosed film process that that had already adopted the new standard solved “a $200,000 problem.” Due to disputes regarding the thickness of the film, the processor’s bag-maker customer was rejecting about 10% to 15% of the film. Over a six-month period, the issue had cost the converter approximately $100,000, and the film producer $15,000 to $20,000 per month. Says Lawrence, “Both the supplier and the converter had SolveTech Profilers to measure film thickness and variability. Film variability was important to the converter as they saw issues with the film sealing, and bags that had high variability were also failing bag tests when they loaded the bags with 30 lb.

“To solve the problem, I utilized the methods in the new ASTM standard, Lawrence continues. “I requested samples of the material, calibrated an instrument at SolveTech using their material, and then created calibration frames which are used as a calibration reference. This calibration of the instrument used the NIST traceable calibration. Using the calibration frames, the buyer and the seller matched their Precision Profilers to each other so there was no longer a discrepancy. Along with the instruments matching each other, they also were accurately calibrated to the correct answer according to gauge by weight. Now the supplier checks the material while he is producing it and before it ever leaves their site. When the converter receives it, they check it as well and get the same answer.

“One year later, the relationship between the film supplier and converter has never been better. Rejections have been reduced from 10% to 15% to 0.5%, resulting in a huge cost savings as well as making both operations run smoothly,” Lawrence notes, adding that the bag-maker plans on requesting that all of their suppliers comply with the new ASTM standard once it is in place since it has been such a help to their operation. 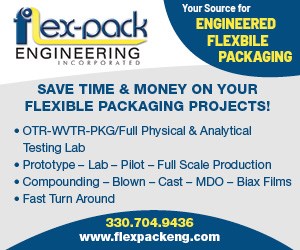