Real-Time NIR Testing Can Slash QC Costs Up to 90%

Once deployed mainly by resin companies and large compounders, real-time, near-infrared (NIR) measurement devices are increasingly finding homes in the labs of smaller compounders, as well as processors and recyclers. These devices have become more portable, cost-effective and easier to use.

So says John Bogart, managing director of Kett US, Villa Park, Calif., which currently offers nearly 200 instruments for moisture and composition analysis, including NIR devices. With its NIR moisture and/or composition analyzers, the company targets compounders and recyclers as well as molders, film and sheet extruders and thermoformers. 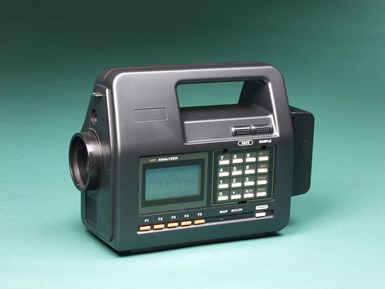 Portable NIR moisture analyzers such as the Kett KJT130 sell for about $16,000.

While traditional testing is critical in determining polymer properties from simple moisture content to complete chemical analysis, it is time-consuming and labor-intensive and has substantial costs for the purchase and disposal of consumables such as reagents and chemicals. Typically, it requires sample preparation, and can take 5 to 15 min for moisture testing and 24 to 48 hr for more complex chemical testing.

But Bogart says NIR spectroscopy can now provide immediate, real-time laboratory quality readings via a non-contact measurement method that can deliver moisture, composition analysis, and even full-spectrum composition readings for a fraction of the cost of conventional methods. “Changing from current direct methods to NIR analysis can slash testing costs by up to 90% due to the dramatic reduction in both ‘people time’ and the elimination of chemical reagents, scrap from testing, and ‘people error’ that creates the need to repeat the tests.”

Additional cost savings are related to energy optimization, yield optimization and reduction in quality defects, says Bogart, who says these are generally very substantial but are difficult to predict up front.  “As an example, if people costs are $20/hr (very conservative), the total costs for 1 hr budgets at about $28. If we say that one or two ‘moisture-only tests’ are conducted per day, the cost is $28 if you budget 30 min for each test. The NIR test takes 6 sec or, if online, is continuous. Six seconds vs. 3600 sec is 0.16%, a reduction of 98.84%. The cost of a moisture-only desktop unit is about $12 per business day.”

“Changing from current direct methods to NIR analysis can slash testing costs by up to 90% due.”

Bogart maintains that even with the cost of a new instrument, a customer saves money each day and the testing cost is reduced by at least 90%, given  very conservative estimates for hourly pay and number of tests used in his example. “This why even ‘small’ companies should consider migrating to this technology.”

He says, “Real-time NIR measurement enables continuous monitoring and optimization of polymer processes. It provides more timely quality assurance data than a team of QA people using traditional testing methods, and 100% of the product can be inspected.”  Instant testing enables superior quality control and immediate adjustment if a process starts to drift out of the target range, he states.  The results can improve batch consistency and yield, while helping to eliminate batch failure and reduce material waste.

NIR spectroscopy bounces beams of light off a solid, slurry or liquid and measures how much light is absorbed in certain wavelengths—about 700 to 2500 nanometers.  This produces an “optical fingerprint” of the sample’s chemical composition, with the device calculating the desired measurements after it has initially been calibrated to a lab or production standard.

The equipment can be handheld, desktop, online or inline, and is versatile enough to work inside mixers, blenders, extruders, or pneumatic and vacuum transfer lines, as well as pipe-flow applications when utilizing fiber-optic accessories.

Bogart notes that not all processors have a need for the most sophisticated and costly NIR testing devices for every application. “Don’t pay for a Lamborghini if you need a Ford, or for a Ford if you need a Lamborghini,” he advises. “For many polymer applications, a moisture meter is all that is needed. A composition analyzer is a step up; and a full-spectrum machine goes beyond that when even more comprehensive or specialized testing is required.”

While polymer manufacturers are more familiar with traditional methods, for those concerned not only with quality but also profitability, selecting the NIR approach that works best for the application can have a major impact on the bottom line.

The Right Device for the Job

There are two general categories of NIR devices: filter-based and full-spectrum. Filter-based devices are particularly well suited to most types of processing, according to Bogart.

NIR filter-based equipment blocks visible light and allows only certain wavelengths of IR light to enter the device. Bogart notes that  filter-based products, which include moisture meters and composition analyzers, are simpler than full-spectrum devices because they work with a limited range of wavelengths. However, the devices have some advantages.

“Filter-based products are less expensive, easier to calibrate and maintain. The devices are also more robust and typically more stable for operators to use. The drawback is that the instruments are more limited in what they can test,” says Bogart.

A loss-on-drying test, which measures the total material weight change after drying, is the traditional method of measuring moisture. However, such gravimetric tests typically require a sample to be prepared and brought back to the lab. The test takes at least 15 minutes to several hours to perform, which is too slow when more immediate measurements are required. Also, it requires the sample to be altered or destroyed. 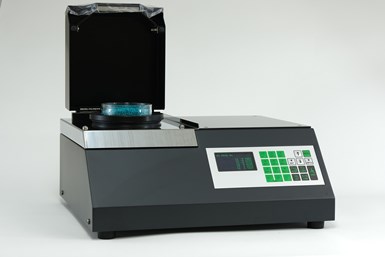 As an immediate, real-time alternative, NIR moisture meters are the simplest and most economical type of filter-based devices. They are instant, non-destructive and they may even be non-contact. Often, NIR moisture meters are used to inspect incoming raw materials.  However, the meters can be used anywhere in the production process where achieving a specific moisture content is important. These devices typically use only a couple of wavelengths for moisture measurement.

Bogart relates an example of a polymer manufacturer that uses a NIR moisture meter to produce pellets for a medical-device company. The customer creates products that are inserted into the body. For this application, the polymer manufacturer needs to have extremely low moisture in the pellets before they are injection molded. If the moisture level rises above a certain amount, the molding process does not work well, which increases the part failure risk.

Says Bogart, “The polymer pellets must be precisely made and properly packaged with very little moisture; and the samples cannot be destroyed during verification. So, the manufacturer uses NIR moisture metering to cost-effectively ensure that 100% of polymer pellets safely meet the required criteria.”

NIR moisture analyzers sell for $10,000 to $12,000 for a desktop unit, $16,000 for portable units, $12,000 to $25,000 for online units that would work well over a conveyor belt, and about $25,000 for inline units that can be used within a extruder, mixer, blender, grinder, pneumatic/vacuum conveyor or hopper. These are typically simple to calibrate and may only need two samples to get a reading.

NIR composition analyzers are a step up in measuring capability and usually can simultaneously measure a few different chemical components in the polymer while being limited to about six to seven wavelengths of IR light. In addition to moisture, the devices may also be used to measure residual oils or solvents, which can cause contamination issues if not detected and removed. They are an alternative to traditional, time-consuming and labor-intensive loss-on-drying and Karl Fischer methods of moisture analysis; Soxhlet extraction for oil residue; and gas chromatography for solvent extractions. 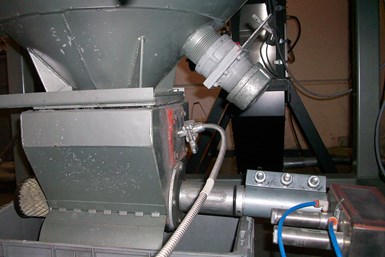 Bogart points to another common use of such a device.  “The industry often uses recycled plastic as a raw input, but does not always know where it comes from.  So, manufacturers may want to measure total oil and solvent in addition to moisture, since any residual contaminants can disrupt the process and even cause a plant malfunction,” he says.

A third standard use of this type of device is to measure coating or film thickness.  Both desktop and real-time online process measurements are possible in many cases.  Generally, the price point of the NIR composition analyzer is substantially lower than alternative technologies.

Because polymers are so widely used in a variety of industries, Bogart notes that composition analyzers are often used not only on incoming materials, but also on in-process materials, final products, and even on external product failures and returns to help determine the cause of the problem.

Because NIR composition analyzers are designed to detect moisture and additive residues, their cost and calibration requirements are a bit higher and more complex than NIR moisture-only units . Their prices start around $18,000 for a desktop system to $28,000-29,000 for inline or online systems. Such systems operate similarly but differ only in the location at which the customer wishes to test. These can simultaneously measure multiple organics such as water, total oil/fat, protein, sugar, fiber, and solvent/alcohol.

In contrast to filter-based devices, NIR full-spectrum devices may measure over 500 wavelengths to determine whether certain substances or materials meet a wide range of criteria. 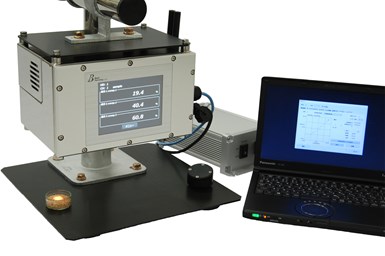 With full-spectrum testing, the broadest number of targeted factors can be measured in real-time, once the device is specifically calibrated for their detection. In addition to moisture, for example, manufacturers may often measure polymer density, viscosity, melt-flow rate (MFR), and concentration of functional groups.

These units sell in the $40,000 to $60,000 range and are more complex to calibrate than the moisture-only and filter/composition meters.These units are a good option for  those that want to measure multiple organic components or a special component—such as two solvents and one additive as well as moisture.