Building a Better Buffer: Conveyor Tech at the Core of Lights-Out Molding Cell

Family-owned Happ Kunststoffspritzgusswerk und Formenbau GmbH (Ruppichteroth, Germany), which began life in 1964 making lunch boxes and furniture fittings, has turned a 2014 project to create an automated climbing wall, where users can adjust the angle and speed of the “ascent”, into a side automation business. A business that occasionally supplies systems to Happ.

Happ established that subsidiary—ErgoTek—in 2015 after the 2014 creation of the Ergo-Wall. Today, the original Ergo-Wall is at the University of Potsdam helping train physiotherapists. Since 2018, Happ has used the modules at the heart of the modular conveyors to create industrial automation systems, including its FlexiTek system, which uses precise timing to create buffer inventories. These are particularly useful in lights-out injection molding operations that combine multiple components—often with disparate cycle times—into a final assembly. 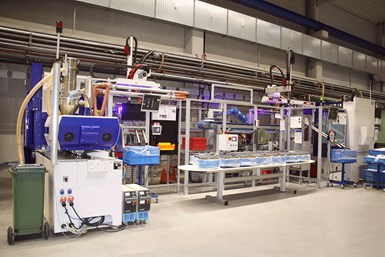 Two EcoPower 110/350 injection molding machines from are inked together by conveyor systems with buffer capacity. 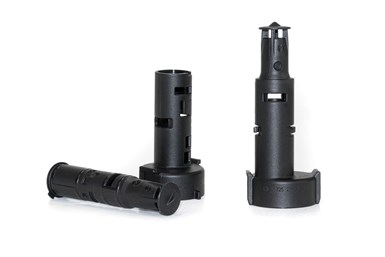 Inside and outside tube of the oil filter drain screw at left and the finished product on the right.

In this system, two 125-ton EcoPower 110/350 machines are integrated, each of which equipped with a W818 robot from Wittmann. The Wittmann EcoPower’s mold the inner and outer tubes of the oil filter drain screw from 2-cavity molds. The parts are then removed by the robot, which presents them to a camera to inspect the parts’ dimensional accuracy. Another camera examines the parts for burrs. Next, the tubes are transported by FlexiTek conveyors from ErgoTek and buffered for cooling.

A Scara robot then assembles the outer tube onto the inner. With the help of an articulated robot and a further camera check, the depth is measured, and the parts are transferred to a labeling band for laser printing. From there, the finished components are transferred to the Flexi buffer from ErgoTek.

A Wittmann Battenfeld spokesperson told Plastics Technology the components are molded from a glass-fiber reinforced PA6, and they must cool for at least 4 minutes. The cycle times for the two parts are both approximately 19 seconds. “The control concept is designed in such a way that the conveyors communicate with the robots via signals,” the spokesperson said, “and that autonomous operation is maintained in the event of a fault.” 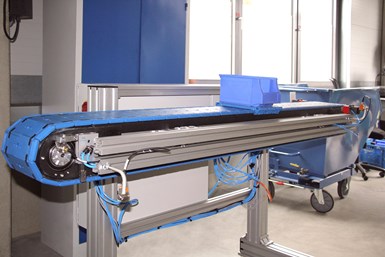 The assembled parts are deposited into Euro containers or KLTs. Once 90 are inserted, the KLT is ready to deliver to the customer. Apart from swapping out new KLTs every 2-3 hours, the process runs lights out sans human intervention. Happ says this system has made cost-efficient manufacturing of this product possible. Apart from economy, other benefits include eliminating the storage of work-in-progress parts, which also allows cavity tracking and better lot-to-lot traceability. In addition, parts can be removed automatically at preset intervals for SPC processes, and if an interruption occurs with any part of the cell, the other components can continue their production for up to one hour.

In all, Happ has seven all-electric EcoPower machines from Wittmann Battenfeld. Most of the machines from the EcoPower series are equipped with Wittmann’s W818 and W822 robots and to dry its materials, the company uses a Wittmann central material drying system.