Prices of four of the five major commodity resins were in various stages of an upward trajectory going into the third quarter. PET was the exception, with tabs mostly flat due to high domestic production and continued imports. Driving higher prices for the other resins were increased domestic demand (particularly for PE) and stronger export activity as North American suppliers regained their feedstock advantage once crude-oil prices jumped up to $40/bbl. Clouding the future outlook were uncertainties about the course of the COVID-19 pandemic and expectations for an active hurricane season ahead.

Those were the views of purchasing consultants from Resin Technology, Inc. (RTi), senior editors from PetroChemWire (PCW), and CEO Michael Greenberg of The Plastics Exchange.

Polyethylene prices moved up 4¢/lb in June, as suppliers reclaimed the amount they lost in April, according to Mike Burns, RTi’s v.p. of PE markets, as well as PCW’s senior editor David Barry and The Plastic Exchange’s Michael Greenberg. This increase was attributed to strong restocking demand coupled with strong exports. And suppliers were seeking another 5¢/lb for July.

Burns and Barry did not totally discount the potential for at least partial implementation of the July price hike. Burns noted a minimal gain in supplier inventories in May, with both demand and production levels above 90%. “You could almost say that the market is nearly ‘COVID-19 foolproof,’ with PE processors reporting they are very busy—from film packaging to roofing tiles to conduit pipe and other durable goods—along with strong exports and tighter supply.” 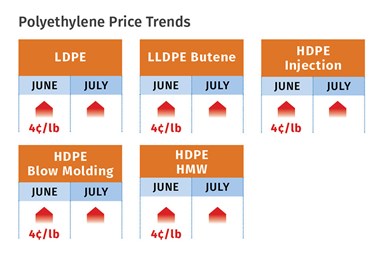 Both sources noted two wild cards in their forecasting—a weather-related event and COVID-19. Barry reported that some suppliers mentioned potential issues with plant staffing as COVID-19 cases mounted in Texas. Meanwhile, LBI and Dow announced further production cuts, while Formosa began multi-month maintenance turnarounds for over 1 billion lb of HDPE capacity in July, according to Burns. He ventured that if oil and PE production cuts continue through the third quarter, North American PE prices will remain firm, with additional price increases more likely than decreases.

On the spot market going into July, Greenberg reported, “Buyers were still looking for resin at old pricing, but availability continued to tighten and few special deals were to be found. Certain grades were difficult to source without jumping the price several cents; these included LDPE for film and injection, LLDPE granular, as well as HDPE for film and blow molding. Most producers were essentially sold out for the remainder of the month as they turned their attention towards July along with their next 5¢/lb increase.” Barry attributed some of the tightness to suppliers reducing output, along with stronger domestic demand due partly to prebuying among large processors.

PP Prices Up, but for How Long?

Polypropylene prices moved up in June by 0.5¢/lb in step with propylene monomer contracts, butt were projected to be flat last month and possibly this month, according to Scott Newell, RTi’s v.p. of PP markets, as well as Barry and Greenberg. LBI had issued a margin price hike of 3¢/lb for August 1. Spot PP prices were reported to be higher and supply tightening at the start of July, and exports were reportedly robust, owing to the U.S. feedstock advantage over Asian resin producers.

Barry thought PP prices could be flat, or see at most a small increase, between July and September. He cited the startup of Braskem’s more than 1-billion-lb/yr plant in LaPorte, Texas, despite three major planned shutdowns by other producers in July and August. “Also, I don’t think propylene monomer prices have room to move up much more because domestic supplier are dependent on monomer exports. Meanwhile, the two wild cards are  COVID-19 and weather-related events.”  He also reported some strengthening in domestic demand in June, with PP compounders getting back on track after durable-goods and automotive supply chains shut down during the March-to-May period. 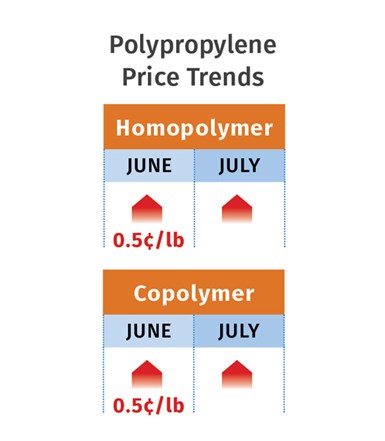 Noting the large drawdown of monomer stocks by end of June, Newell ventured that July propylene contract prices could move up 3-5¢/lb. “But, this feels like a temporary upward pricing trajectory; domestic demand is still struggling and this movement is all monomer driven,” noted Newell. He ventured that when two large propylene units (a BASF/Total propylene cracker and  Enterprise’s PDH plant) were back in full operation by this month, there could be some downward pricing pressure on the monomer and PP.

Polystyrene prices were flat in June, following the 12¢/lb decrease in the previous two months. However, suppliers were aiming to implement a 2¢/lb increase that month, attributed to higher benzene costs, which had only moved up 0.5¢/gal.

According to Robin Chesshier, RTi’s  v.p. of PE, PS and nylon 6 markets, processors were pushing back hard as demand dropped a total of 15% year-to-date between March and June, and suppliers throttled back operating rates to just above 51%, a low not seen in years. PCW’s Barry noted that that spot and wide-spec prices did move up 1-2¢/lb in June, with limited spot availability. 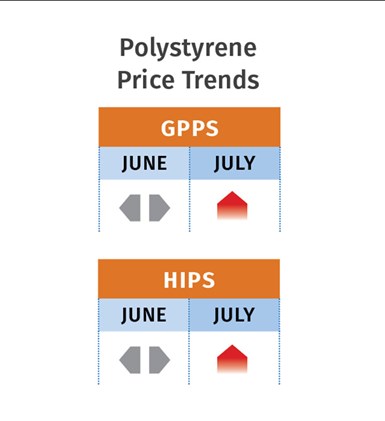 However, the pricing trajectory was about to reverse last month, according to both sources, due to higher spot benzene prices. Chesshier said contract benzene prices, which were at a low of $1/gal in June, had potential to move up to $1.30/gal or $1.35/gal, which would translate to a 3-4¢/lb increase in PS production costs. Chesshier noted that between July and October, the industry could well see a increases totalling at least 10¢/lb, driven by increased demand, higher feedstock costs, and the uncertainty of the hurricane season. At June’s end, Barry reported that the implied styrene cost, based on a 30/70 ratio of spot ethylene to benzene, was 17.1¢/lb, up 4.3¢/lb from the start of that month. While expected prices would move up in July, he expected this month’s prices to be flat or possibly slightly up.

PVC Prices Slumped, then Picked Up

PVC prices dropped 3¢/lb in May (after the 5¢/lb April drop), but then moved up 3¢ in June. Another 3¢/lb hike, effective July 1, was on the table, according to both Mark Kallman, RTi’s v.p. of PVC and engineering resins, and PCW senior editor Donna Todd. Key drivers for this reversal include strong exports, reduced supplier inventories, and a 3.5¢/lb increase in ethylene contract prices.

Kallman also cited some optimism for increased demand from the construction sector along with a strong pipe market. He called the July 3¢ increase a “taller order,” noting that it will depend on whether there is further reduction in supplier inventories and increased demand from the construction sector. He also cautioned that COVID-19 could dampen some of this growth in certain areas. 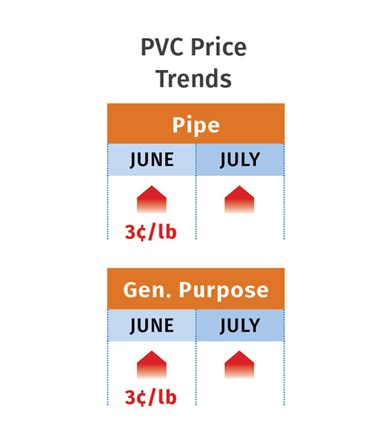 Todd reported that industry projections were that suppliers would get 2¢ out of the July 3¢/lb increase. “At that rate, the total of 5¢/lb in price hikes would still leave suppliers 3¢/lb in the hole. As such, market watchers fully expect them to issue a third 3¢/lb price hike, for a total of 8¢/lb, at which point they would break even. If the past is prologue, producers would then announce a fourth price hike in order to gain some margin before going into contract negotiations with their clients later this year.”

PET prices remained flat in the low-40¢/lb range, delivered U.S. Midwest and South, in June due to robust domestic and import supply, which kept pace with rising demand for single-use plastics, including PET bottles and containers, according to PCW senior editor Xavier Cronin. This was tied to the pandemic, which has resulted in an increase in PET and other plastic containers used for takeout food and beverages and food at retail outlets. 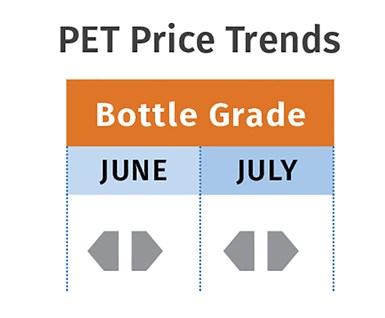 Cronin ventured that PET prices would again settle at this level in July, and possibly August. There were no indications that U.S. suppliers would slow production output, while imports continue flowing into the country from numerous places around the world.