Stretch film accounted for 2.4 billion lb of PE of resin consumption in 2019, making this sector one of the largest and fastest growing markets within the PE film industry, according to Mastio’s research. The top five players hold about 80% of the market.

With this blog we launch a series of articles based on 2019-2020 research conducted by market-research firm Mastio & Co., St. Joseph, Mo. on key markets for extruders of polyethylene film. There will be 10 articles in all, two a week. The first five—beginning with this one—will offer Mastio’s analysis—based on interviews with processors conducted direct by the Missouri firm—with film processors representing the five largest PE film markets. The second batch of five will be focused on the five fast-growing PE film markets.

Check out the video that accompanies each of these articles in which Kevin Huntsman, Mastio’s senior vice president, and I discuss the takeaways of each market highlighted.

In 2019, approximately 2.4 billion lb of PE was consumed in the production of stretch film, making this sector one of the largest and fastest growing markets within the PE film industry, according to Mastio’s research. With an average annual growth rate (AAGR) of 4%, Mastio PE resin consumption to 2.7 billion by 2022. 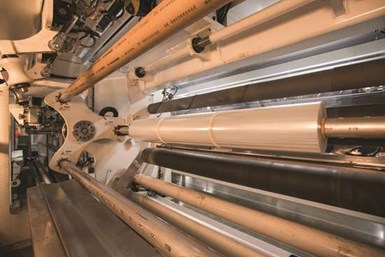 In his reports, Mastio notes that in both the blown and cast film extrusion processes, coextruded stretch film constructions allow processors to design a film that has high levels of cling and one-side slip, ensuring a low coefficient of friction (COF). Coextruded stretch films allow for maximum utilization of space where pallets, boxes and rolls of stretch wrapped products are tightly packed in rail cars, transportation vehicles, and warehouses. One-side slip prevents stretch-wrapped products from sticking to each other or disrupting the packaging. Stretch films are available in a wide range of tackifier levels designed to reduce noise during application and to avoid damage to products or packaging during removal, without any leftover adhesive residue.

Coextruded stretch film constructions allow processors to design a film that has high levels of cling and one-side slip, ensuring a low COF.

Zummit Plastics also located in Phoenix. is another new participant in the North American stretch film market. Mastio’s research revealed that they are currently looking to expand by adding two cast film extrusion lines and possibly building facilities in the eastern U.S. over the next two years. Specifically, there has been discussion of expanding in Columbus, Georgia.

Stretch films continue to become much more sophisticated in composition and construction. Stretch films are also custom designed for specific end-use applications. Many specialty blends of LLDPE and LDPE resins are being utilized in the manufacturing of monolayer stretch films.

Additionally, greater use of coextruded films, using all grades of PE resins, can provide a multitude of combinations of desirable film properties. Varying degrees of one-or two-sided cling and one-sided or two-sided slip are the main reasons for utilizing coextrusion technologies.

Metallocene-based LLDPE resin has experienced a great increase in utilization for stretch film over the last several years. Due to its inherent elastomeric/rubber-like properties and when used in blends or in coextrusion, mLLDPE yields higher levels of film clarity, greater stretch levels, and greater impact resistance at lower gauges than conventionally produced LLDPE resins.

In 2019 more than 78% of the stretch film produced was made via cast film.

Some participants in this market coextruded PE materials with PP resin. A common blend of stretch film contains 5% to 25% LDPE resin with 75.0% to 95.0% representing LLDPE-butene, LLDPE-hexene, LLDPE-super hexene, LLDPE-octene, or mLLDPE resins. LDPE/LLDPE resin blends exhibit good clarity and a higher tendency to elongate under load, due to their lower degree of crystallinity and resultant modulus.

During 2019, some participants in this market were optimistic about increased growth in demand due to the current improved economic conditions and expectations over the next three years, while a few others felt that growth would result from gaining market share from other competitors. Generally, the reported overall production of stretch film has increased and will continue to grow through the year 2022 due to the tremendous PE capacity currently coming in, companies developing new products, companies adding capacity, building new plants, adding new equipment, and/or adding building square footage.

As the economy fluctuates, many stretch film producers feel they are the first ones to feel the effects. If the economy goes into a recession there will be less consumer purchases, therefore resulting in less shipping and less stretch film usage. Remember also that downgauging is a key trend in this market which impacts the growth of stretch film on a pounds-consumed basis.

It’s unclear to what extent nanolayer technology is being used among North American suppliers due to patent issues. It’s more common in Europe, leading some to speculate that stretch-film processors based there will be setting up shop in North America at some point to offer this new technology while taking advantage of generally lower resin prices.