Digital metallic and multicolor decorating of squeeze tubes, combination hot-stamping and four-color printing machine, and large-area injection molding IMD were some of the news from Kurz at K 2019.
#color

In-mold decorating technologies for injection molding and digital printing on extruded tubes were just some of the news in plastics decorating from Kurz at the K 2019 show in Germany. Several IMD techniques for touch-sensitive switches, functional foils, and decorative effects were discussed in our September K preview and October Keeping Up section. Here’s what else was new from Kurz:

Kurz/Isimat Digital inline Foiling is followed by indirect digital multicolor printing produces a more radiant effect in the tubes on the right, compared with the tubes printed without metalization on the left.

•  Digital metalization and multicolor printing on tubes is possible with a new combination of two digital techniques. First Digital inline Foiling (DiF), developed by Kurz’s Isimat subsidiary, is used to apply either 360° or selective metallic decoration to the tube. In one module of a central printing machine, adhesive is digitally printed on a carrier foil. The metallic transfer layer is then applied to the tube at low contact pressure, and the special adhesive is then UV cured. Next, the metalized design can be overprinted in multiple colors by Indirect Digital Decoration (IDD). In a second module in the same central printing machine, a digitally printed multicolor design on a carrier foil with adhesive is transferred to the tube on top of the metallic layer. This combined IDD + DiF process eliminates wet-on-wet decoration and is said to allow for economical production of small print runs and limited-edition promotional items—and even for individualized decoration of sequential parts with names, serial numbers, or unique elements.

•  A new hybrid machine for hot stamping and digital printing was also presented by Kurz at K 2019. It was developed for efficient creation of designs and labels for small runs and individualized products. The hybrid machine from Kurz’s Baier subsidiary has two decoration stations that can be used in any order—a hot stamper and a digital four-color printer. The hot stamper has a drum to which four dies can be attached, so that four different designs can be applied as desired. A new quick-change system requires no tools. Selection of a design from the controller automatically implements stored process parameters for that design. Two foil-feed units allow two different designs to be processed at the same time. The four dies can be freely assigned to either of the two foil tracks. 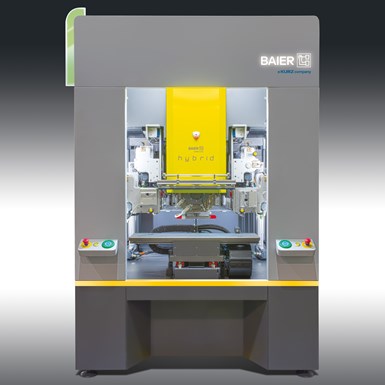 New Baier hybrid machine for both hot stamping and four-color digital printing on the same part.

The second station is a CMYK digital printer with 600-dpi resolution; an additional print head for the color white can be added. Both decoration processes can be performed in a single operation; the part to be decorated is placed in the fixture only once, on a sliding table that transfers between stations.

•  A Kurz IMD process for large single images was demonstrated at the Sumitomo (SHI) Demag booth. Backlightable single images measuring over 900 mm long were produced on an all-electric IntElect 500-ton injection machine. The part was a concept cover for an auto instrument panel with a touchscreen and touch panel using Kurz PolyTC sensors applied in-mold via IML.

•  A study on recycling of in-mold decorated plastics was presented by Kurz at the VDMA Circular Economy Forum at the show. Plastic parts with and without IMD were recycled repeatedly and tested under a variety of conditions. According to Kurz, the results clearly showed that the extremely thin decorative layers presented no barrier to recyclability, regardless of whether the decoration was only a transferred coating or also included a carrier foil bonded to the part.