System can be installed on new line or on a retrofit basis to improve quality and cut resin costs.
#kshow #monitoring

During October’s K 2019 show in Dusseldorf, Maguire Products displayed a new control system for blown film that can be deployed in a new production line as part of a total system providing single-point supervision of all line components, or used in an existing line to increase productivity and reduce material cost.

For a new blown film extrusion or coextrusion line, there are three basic components at the heart of the Maguire + Syncro extrusion control system: the Maguire WXB Weigh Extrusion Blender, which incorporates a gain-in-weight weigh bin and a loss-in-weight mix chamber; the Maguire 4088 controller, which controls the loading, blending, and metering of raw material to the extrusion process; and the Syncro controller, which uses the consumption data from the 4088 controller to control line speed and haul-off. Modes of extrusion control available with the Maguire + Syncro system include lb or kg/hr; weight per length of extrudate; and product thickness in microns. 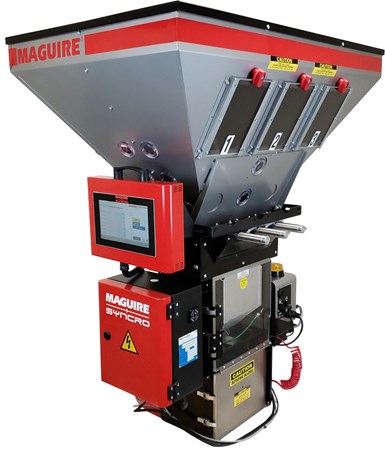 The Maguire + Syncro system is the product of a partnership between Maguire and Italy-based Syncro srl that began in 2016 with Maguire taking an investment position with Syncro, which specializes in controls for all types of extrusion process. If, in addition to extrusion control, the blown film manufacturer seeks to achieve single-point control of the entire production line, Syncro has developed the Syntrol™ supervisory system, which allows multiple line controls to be visualized and synchronized from one touchscreen. These controls include those for extruder temperature and pressure, air ring, IBC, thickness gauge, cage, and haul-off.

Along with the Syntrol controller, Syncro supplies key line components, including: 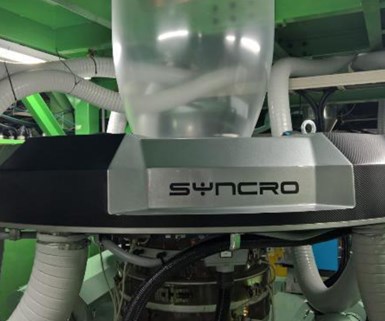 A turnkey system that includes these components plus loading and blending equipment from Maguire is available directly from Syncro and can also be ordered through Maguire representatives. In addition to the WXB blender and 4088 controller, Maguire produces the compact MLS “mini-central” loading system; the FlexBus plant-wide conveying system, which can operate up to five vacuum pumps and 240 receivers; and the FlexBus Lite system, allowing local control of a single pump and up to 10 receivers.

For an existing production line which includes a standard Maguire Weigh Scale Blender instead of the WXB unit, the processor can obtain the new extrusion control capability by installing the 4088 controller, a loss-in-weight hopper, and the Syncro controller.