Volume Resin Prices Flat or Down

Prices of nearly all volume resins were largely expected to bottom out by the end of 2019, and flat pricing was generally projected for the start of this new decade. Factors driving the downward trajectory included lower feedstock prices, supply outpacing demand, and an overall global demand slowdown and lower global prices.

Those are the views of purchasing consultants from Resin Technology, Inc. (RTi), senior editors from Houston-based PetroChemWire (PCW); and CEO Michael Greenberg of The Plastics Exchange.

Polyethylene prices dropped 3¢/lb in November and there was potential for another price drop in December, according to Mike Burns, RTi’s vp of PE markets, as well as PCW senior editor David Barry and The Plastic Exchange’s Greenberg. These forecasts appear to brush off suppliers’ announced 4¢/lb increase for December (delayed from November); meanwhile, Dow announced a new 5¢/lb hike for Jan. 1. Said Burns, “The historical first-quarter upward pricing pressure may be challenged this year due to overcapacity and lower global prices that domestic suppliers need to keep matching in order to export.” 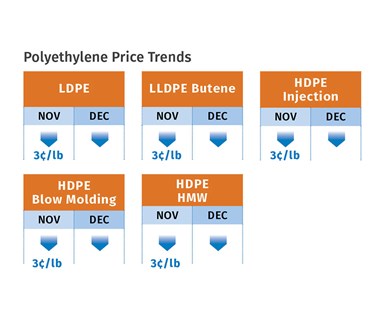 These sources saw PE prices bottoming out in December. PCW’s Barry noted that weather-related issues may offer suppliers a slim chance to push through some or all of their fourth-quarter 4¢ price hike. While they noted that material was being offered on the spot market at significant discounts, they also conceded that U.S.-Canadian PE operating rates had dropped to around 85% in the third and fourth quarters, which could have some affect on resin availability.

Polypropylene prices dropped 2.5¢/lb in November in step with propylene monomer, which dropped to 35¢/lb. However, both Scott Newell, RTi’s vp of PP markets, and PCW’s Barry noted that additional price concessions on the order of 0.5-1.5¢/lb were reportedly granted that month. Another 1-2¢/lb decrease for December was projected for the monomer, potentially leading to an additional 1¢ decrease for PP. While these sources ventured that PP demand might continue to “struggle” in this first quarter, they expected prices to be flat. 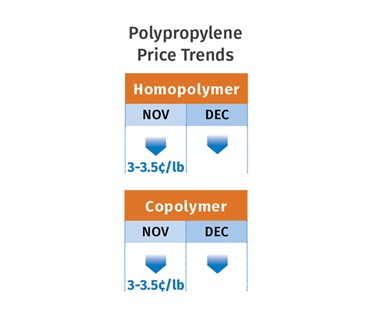 The Plastic Exchange’s Greenberg observed healthy spot buying activity in PP in early December, but the flow of offers diminished as spot prices slid by 3¢/lb. Meanwhile, plant production rates were cut back in the fourth quarter and production slated to come on stream from two new facilities was pushed back to sometime this quarter. Greenberg reported that propylene monomer inventories are high and supplies are likely to remain ample.

Polystyrene prices dropped 3¢/lb in November, in step with that month’s benzene contract settlement of $2.23/gal, down from October’s $2.60/gal, which had been the lowest of 2019, according to both Robin Chesshier, RTi’s vp of PE, PS and nylon 6 markets, and PCW’s Barry. They anticipated the November drop and saw potential for another 2¢/lb decline in December. 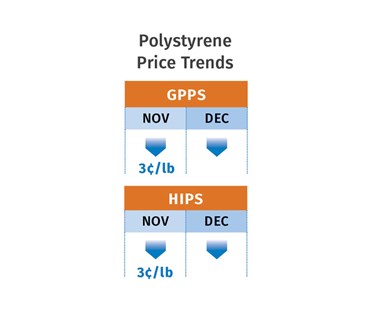 Chesshier noted that December benzene contract prices looked likely to remain flat and PS suppliers would likely aim to hold onto their margins and not cut prices. She also noted that prices of styrene monomer are close to a 10-year low and those of butadiene are at a three-year low. Barry cited industry data through October that showed domestic demand down by over 5%.

PVC Prices Flat to Down

PVC prices held even in October and were projected to drop 1¢/lb in November and possibly again last month, noted both Mark Kallman, RTi’s vp of PVC and engineering resins, and PCW senior editor Donna Todd. Todd noted that the suppliers’ October 3¢ price hike was the first time in 2019 that suppliers “failed utterly to enact a price hike.” 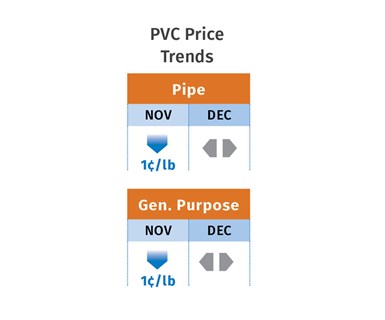 Prices last year rose 2¢/lb in June, then dropped 1¢/lb in August, leaving suppliers with a net gain of 1¢/lb, though the projected drop in November and/or December would take pricing to flat or down for 2019. Todd reported that at least one supplier threatened to announce a “big” price increase for Jan. 1, even while a drop was being predicted for the November-December. Kallman thought pricing would be at a standstill going into this year, due to potential for lower ethylene prices and new PVC capacity from Westlake Chemicals.

PET prices were steady as December rolled in at 45-50¢/lb and were expected to stay at that level through the Holidays, with very little spot-market activity, according to PCW senior editor Xavier Cronin. He characterized demand as weak and supply as abundant. 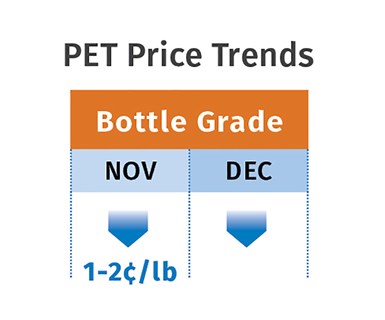 Railcar business for first-quarter 2020 was booked at the low end of the December price range. Meanwhile, imported PET was down to the low 40¢/lb range for supersacks delivered to Southern California. Vietnam emerged in 2019 as the third top source of U.S. PET imports, after Mexico and Canada. Cronin ventured that PET prices this month could tumble a few cents as demand for single-use PET bottles and containers is typically weak during the cold-weather months.

ABS prices were flat in the fourth quarter, as in most of the previous two quarters, and were expected to continue as such entering 2020, according to RTi’s Kallman. He noted that pricing is already in a “good place,” with fairly tepid demand and a well-supplied market, including a healthy dose of imports. One caveat noted is the potential impact on butadiene prices following the explosion of the TPC Group’s plant at Port Neches, Texas, on Nov. 27. It has a significant yearly production of nearly 370 million lb/yr. Butadiene prices reportedly had already moved up 2-3¢/lb by December, though styrene monomer prices were dropping.

PC Prices Flat to Down

Polycarbonate prices were flat to modestly lower (less than 5¢/lb) through the fourth quarter after some erosion in the third. RTi’s Kallman predicted that prices would drop going into the first quarter, as costs of key feedstocks were expected to be lower going into 2020. Meanwhile, there were ample domestic supply and well-priced imports, and lower global demand.

Nylon 6 prices in the fourth quarter were weaker than in the previous two quarters, with price concessions from suppliers aiming to maintain or gain market share, according to RTi’s Chesshier. Automotive demand is waning due to the move toward electric or hybrid vehicles, which is making nylon 6 easy to replace with materials such as PP where heat resistance is not required. Chesshier ventured that nylon 6 prices had further potential to drop  this month, noting that demand is lower across key markets, and there is new global supply of both caprolactam and nylon 6 coming on stream. Nylon 6 imports are down as domestic supplies have kept prices in check.

Nylon 66 prices were flat to modestly down (under 5¢/lb) through the fourth quarter, but RTi’s Kallman foresaw a downward trajectory going into the first quarter. He said demand would be challenged going into 2020, but not as much as in 2019. The slowdown in automotive appeared to have moderated a bit in the third quarter: U.S. was down, 1%, Europe down 0.7% and China down 9.4%. (That was a big improvement over the first half of 2019: U.S. down 2%, Europe down 3.1%, and China down 12.4%.)