Prices Down for Polyolefins & PET

Going into the second half of the year, prices were falling for PP, PET and PE. Prices of PP and PET may have bottomed out in July, owing to seasonal inventory buildup for the former and upward pressure from feedstock costs for the latter. In contrast, prices of PE were expected to drop farther, owing to a decline in global prices and ample supplies. Meanwhile prices of PS and PVC were moving upward, driven by benzene feedstock in the case of PS and suppliers’ claims of tight supply of PVC. However, in the case of both resins, all other key drivers pointed to flat to lower tabs.

These were the views of purchasing consultants from Resin Technology, Inc. (RTi), senior editors from PetroChemWire (PCW ); and CEO Michael Greenberg of the Plastics Exchange.

PE Prices Flat to Down

Polyethylene prices were expected to drop in the June-July timeframe, despite suppliers’ June attempt to boost prices by 3¢/lb, following implementation of a similar hike in May. Suppliers delayed the 3¢/lb increase to July. However, RTi’s v.p. of PE, Mike Burns, said prices had a fair chance to drop 3¢/lb in July, followed by flat pricing this month. ”Global prices have dropped, export prices have dropped, and domestic prices will have to keep up with the global price range.”  Burns maintained that record inventories without production or weather disruptions should continue to prevent price hikes and add to downward pressure. PCW’ senior editor David Barry also expected a 3¢ drop in July. Citing industry figures through May, Barry noted that PE domestic sales were up 2.4% year to date, and export volumes were up more than 50%, while production rates were up 7%. 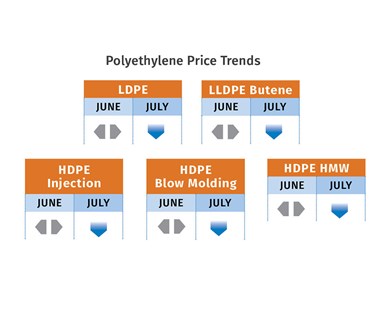 Barry also reported that spot PE prices continued to fall, dropping to the lowest levels since 2009. The Plastic Exchange’s Greenberg reported that the spot PE market ended June somewhat sluggish, contrasting with the first five months, which saw volumes well above that same period in 2018. “As a whole, June was the lightest trading month of the year, as negative sentiment slowed processor purchases, which weighed on prices.”

PP Prices Down for Now

Barry characterized spot availability as decent, but with relatively quiet buying activity after a busy March and April. RTi’s Newell, who predicted a steeper decline for monomer and PP prices, based on an 8¢/lb drop in spot prices, noted that demand has been lackluster, with a bit of an uptick in May and spot PP heavily discounted. Commenting on the spot PP market, Greenberg reported that spot PP trading was improving. “Processors picked away at well-priced offers, but easily shied away from relatively high asking prices when presented. Upstream inventories are the lightest we have seen in the dozen years that we have been tracking.” 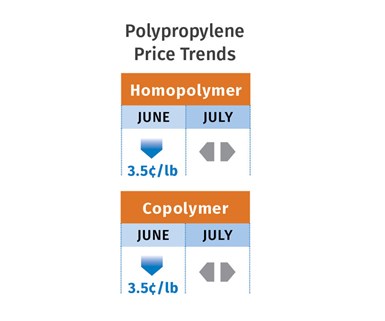 RTi’s Newell noted that June was the fourth month of continuous drawdowns from supplier inventories—a drop of 175 million lb. Days of supply dropped from 39 days in May to a “comfortable” 31.5 days in June. PCW’s Barry noted that the PP supply situation is somewhat of a “mixed bag,” depending on the supplier. “I don’t think the market is oversupplied so much that suppliers will cut production.” All three sources cited soft global PP demand along with new capacity overseas and a good supply picture emerging for propylene monomer. Since the July-August is typically a good time for inventory buildup, Newell ventured PP prices would be flat to slightly higher in that time frame.

PS Prices Up for Now

Polystyrene prices were flat for June, but upward pressure was developing for July, as spot benzene prices shot up to $3/gal. Both PCW’s Barry and Robin Chesshier, RTi’s v.p. of PE, PS and nylon 6 markets expected PS prices to rise by several cents if July benzene contract prices settled at $3/gal or more, up from $2.34/gal. Chesshier saw potential for an unprecedented 7-8¢/lb price increase for PS. Barry predicted a hike closer to 3-4¢/lb. 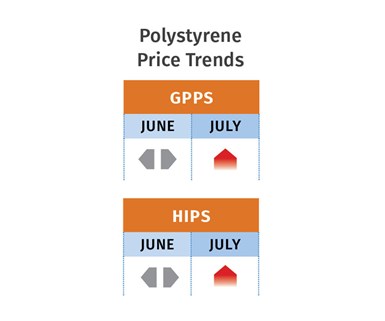 Domestic PS prices have gained a total of 4¢/lb since the beginning of the year. This comes despite lackluster demand, which even lagged behind 2018 even for the seasonal higher demand period. Chesshier noted that the benzene uptick was being driven by tighter supplies both domestically and in exports—the latter due to a drought in the Panama Canal region, which resulted in higher transport prices. Also notable is that spot prices of styrene monomer have not moved, owing to sluggish demand here and abroad, including a nearly a triple-digit decline in demand in Europe alone. As previously reported,,domestic supply was up 2% while demand was up only 1%, and exports for both monomer and PS were down 17%.

PVC prices were flat in May and well into June, but suppliers were still posting a June 2¢/lb increase, according to both Mark Kallman, RTi’s v.p. of PVC and engineering resins, and PCW senior editor Donna Todd. Kallman ventured that July prices could be flat or gain up to 1¢/lb, as suppliers push to implement price increases attributed to tight supplies caused by planned and unplanned production downtime. Domestic production was down 2.6% through May. 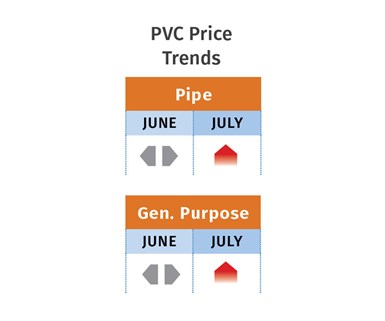 However, all other market indicators opposed an increase: Domestic demand was down 3.7% from 2018, though exports were up 1.44%. May housing starts were lower than in the previous year, and the construction season in general was slow to get going, noted Kallman. Moreover, both sources also said that June ethylene contract price was again expected to drop. Ethylene price declines from last fall through May totaled 9.5¢/lb, which would represent a drop of about 4.56¢/lb in the PVC molecule, according to Todd. Both sources also questioned suppliers’ other justification for a price increase--rising export prices. “Since only about 30% of U.S. PVC production goes into the export market, even some suppliers have confided that this should not be able to pull up the domestic market, reported PCW’s Todd.

PET Prices Plunges but Not for Long

PET resin prices stood at the mid-50¢/lb range by the end of June, a 10¢ drop from May. The plunge was driven primarily by lower feedstock costs and plentiful supply of imported PET from around the world, according to PCW senior editor Xavier Cronin. Interestingly, PET resin imports in April were actually down from April 2018. But a surplus of imports into Southern California, the East Coast and Midwest built up over months has maintained a buyers’ market.

At the same time, prices were thought to have bottomed out, with distributors pointing to higher projected costs for feedstocks PTA and MEG in July. Also, rising oil prices were expected to add further downstream price pressure on these feedstocks. With this in mind, July PET prices were expected to rebound first to the 60¢/lb level and then another 2-5¢/lb, depending on whether the business is spot or based on contracts tied to monthly published feedstock prices. Spot prices are typically higher than contract pricing, explained Cronin.