OnRobot says the software updates were based on customer feedback. The company says they will allow its Eyes vision system to easily sort, inspect or pick/place unstructured objects using color and contour detection. 2.5D vision means the robot can detect Z axis or height information in addition to the X and Y axes tracked by a 2D system. It also allows machine vision system to estimate the objects’ rotation—pitch and yaw—around two of the three dimensions. 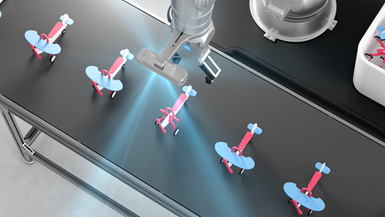 OnRobot notes that the detection method requires no workpiece teaching and finds items based on color and size information input by the operator. The system can be used to check molded parts for short shots or flash post molding, and it also supports manual inspections where operators can set up a camera and inspection program, physically place a part and undertake inspection.

One-shot detection for multiple objects allows the system to pick all workpieces with only one picture, reducing complexity for users and improving cycle times. The update also allows users to request specific workpiece types and specify gripper clearance parameters. The new Landmark Feature simplifies programming of mobile robots to move from station to station using end user-defined Landmarks as their guide. Landmarks can also be used to initiate specific operations, so that when Eyes detects the arrival of a mobile cart in its workspace that is loaded with parts for picking, it can easily switch to pick and place routines.

OnRobot has updated the software for its Eyes vision system, which can attach to traditional robotic arms giving them vision and the ability to perform operations like pick and place.