The process starts with continuous extrusion of a PET parison, which is sliced into blanks or “gobs.”

Compression molded PET preforms have no gate—eliminating many potential quality problems and allowing for lightweighting by stretching the bottle “foot.”

Figure 1: Above: Figure 2: Below: Sacmi’s PAM process involves continuous extrusion of PET, which is cut off into “gobs,” which are placed in a rotary compression molding carousel and then in a post-cooling wheel.

The continuously turning compression molding carousel is housed in a dehumidified enclosure.

Lower cost, higher quality and productivity, and the potential for lightweighting beyond anything yet seen are benefits claimed for a new continuous compression molding process for making PET bottle preforms. The Preform Advance Molding (PAM) process was introduced at the recent K 2007 show in Dusseldorf by Sacmi Imola S.C. of Italy. It’s still too early for PAM to offer a serious challenge to injection molding. By next month, Sacmi plans to have built two machines for in-house development use and hopes to commercialize the system in the second half of this year.

While potentially fomenting a battle between injection and compression molding for the preform business, SACMI has a foot in both camps. Its PAM system is an outgrowth of its established machinery for continuous compression molding of beverage-bottle caps and other closures, which now can turn out up to 100,000 caps/hr. On the other hand, Sacmi recently established a PET division to offer complete preform manufacturing systems encompassing injection presses from its Negri Bossi subsidiary (which now incorporates two other Italian press makers with preform experience, Oima and BM Biraghi), as well as Negri Bossi robots and Sacmi’s preform molds and vision inspection systems. 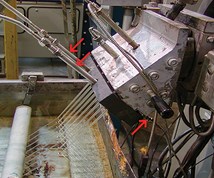 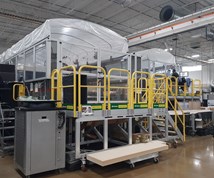 Figures 1 and 2 (shown on right) show the overall process layout and sequence of operations. As with Sacmi’s cap-molding systems, PAM starts with an extruder. The current-generation PAM002 system uses a 120-mm model from Amut of Italy that can process 1760 lb/hr of PET. It continuously extrudes a cylindrical parison, which descends from a vertical die and is cut by a knife into a slug or “gob.” The gob is grabbed by an insertion carousel and dropped into one of 48 mold cavities on a spinning carousel. As it turns (9.5 to 10.5 rpm), the cavities rise to meet the cores and thread splits and mold each preform under 2 tons of force. (PAM systems can be built with up to 5 tons per cavity.) The molding carousel processes standard 0.5L carbonated soft-drink (CSD) preforms—23-g weight, 120-mm long, PCO 1810 neck finish—at up to 450 to 500/hr.

After a 6.5-sec molding cycle (approx. 90% of which involves actual pressing), the core and neck splits lift the preform out of the cavity and another robot transfers the preforms to a post-cooling carousel. The latter has 256 sleeves in which preforms are air-cooled inside and out for the equivalent of 5.3 molding cycles. The preforms leave the system aligned on a conveyor, which permits integration of 100% vision inspection (at up to 650 preforms/min with Sacmi’s PVS-1 multi-camera system) or direct delivery to a stretch-blowing machine.