Prices Up for Major Volume Resins

Prices of nearly all volume resins appeared to be on the way up, with pricing leverage largely held by resin suppliers, at least for the short term. Major drivers of this trajectory included global plant outages, planned and unplanned; tighter feedstock and resin availability; and what industry sources characterized as “catch-up” resin demand after the second quarter’s COVID-19 shutdowns.

Polyethylene prices were flat in November, but suppliers aimed to push through a December 5¢/lb increase, according to Mike Burns, RTi’s v.p. of PE markets, as well as PCW senior editor David Barry and The Plastic Exchange’s Greenberg. According to Burns, drivers included a December force majeure at Braskem-Idesa, the largest producer of LDPE and HDPE in Mexico, and increased global prices for LDPE and HDPE due to import demand in China after production problems in Iran and reduced North American exports during third quarter. Both Burns and Barry originally saw good potential for PE prices this month to drop by as much as 5¢/lb in a buyers’ market. Noted Barry, “I think it will be pretty hard for suppliers to hold on to the 19¢/lb they gained up until November, and there were some good deals on the spot market.” These sources noted that after the third quarter’s demand surge, demand flattened out and supplier inventories were beginning to recover. 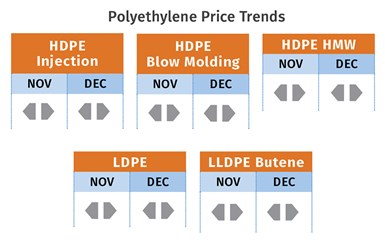 Greenberg described spot PE buyers as holding out for a substantial price decrease that did not develop. “Many processors have been banking on major price relief in order to refill their coffers; and while some small discounts have come through, it has not been enough to excite restocking demand.”

Polypropylene prices in November moved up a net of 5¢/lb: 2¢ in step with propylene monomer and 3¢ of margin increases. Moreover, suppliers also announced another 4¢/lb margin increase above where monomer prices might go for December, according to Scott Newell, RTi’s v.p. of PP markets, confirmed by PCW’s Barry and The Plastic Exchange’s Greenberg. Newell ventured that prices would increase by another 2¢ to 5¢/lb, noting, “This was not expected to be the trajectory of PP prices, but some key factors turned out to support suppliers’ price initiative and essentially kept them in the driver’s seat.”. He cited strong recovery in demand from consumer products, rigid packaging, BOPP, nonwovens and automotive, along with supply tightness in both resin and monomer. 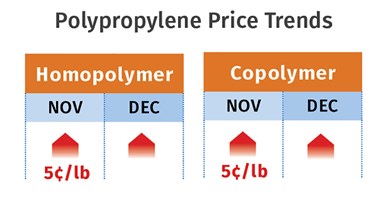 Barry reported in the second week of December that monomer supply constraints were more apparent, with spot prices soaring and PP suppliers struggling to keep up with demand. He noted that some industry sources projected that propylene and PP supply will remain tight well into first-quarter 2021.  Reported Greenberg, “Upstream PP inventories remain at the lowest levels since we began tracking fundamentals 15 years ago, so tightness persists.” All three sources ventured that PP imports were becoming more attractive due to the domestic supply crunch, though the import price was not compelling relative to domestic prices.

Polystyrene suppliers implemented their 2¢/lb increase in November and were seeking 7¢ to 10¢/lb increases for December and were expected to get most of it, according to both Robin Chesshier, RTi’s  v.p. of PE, PS and nylon 6 markets, and PCW’s Barry. Driving the increases were global feedstock price increases based on supply tightness due to planned and unplanned outages in Asia and the Middle East. PS prices this month were likely to be flat. 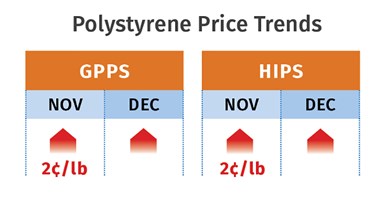 “The dynamics changed from a down to an up market due to these global shortages, with styrene monomer increases pulling up PS prices,” noted Chesshier. According to Barry, the implied styrene cost based on a 30/70 ratio of spot ethylene/benzene was at 30.4¢/lb going into December’s second week, up 9.4¢/lb over the previous four weeks. Styrene export prices were up by 14¢/lb from the start of the fourth quarter. Still, both sources note that domestic production grew by about 8%, while demand was flat. The exception was HIPS, for which demand from the appliance sector has been on the upswing.

PVC prices were flat in November, after a net 16¢/lb in price increases through October 2020, a magnitude not seen since 2005 and similarly the result of  hurricane production disruptions, according to both Mark Kallman, RTi’s v.p. of PVC and engineering resins, and PCW senior editor Donna Todd.  Most major suppliers issued a 3¢/lb December increase; but with the exception of pipe converters, who had raised their prices in the fall and supposed they could do it again if need be, other processors balked at the idea of accepting another increase, according to Todd, who reported, “Some converters were looking for significant resets, while PVC suppliers were determined to keep them as small as possible, if there were any at all.”

Kallman ventured that while suppliers could get push some of the new increase through in December, citing tight supplies, this was a strategic move to influence ongoing new-year contract negotiations. Domestic PVC demand was up by 3% through October, but Kallman noted that things were starting to slow down. He expected PVC prices this month to be flat and possibly a bit lower.

PET prices were in the low-50¢/lb range for spot truckload business delivered in the first week of December, up from 50¢/lb in November, according to PCW senior editor Xavier Cronin. He expected December prices for noncontract spot business to be flat, as a large southern U.S. feedstock plant that limited production since an August storm had ramped up to full production. 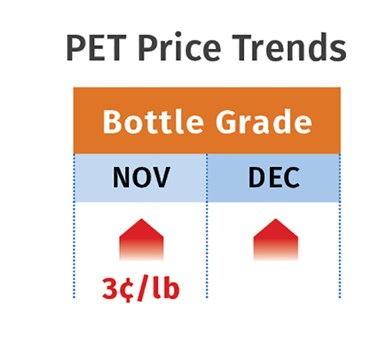 At the same time, PET demand from bottle, container and packaging manufacturers is decreasing due to tapering end-of-year production runs. Yet PET suppliers appeared to have the leverage going into the new year. Noted Cronin, “January will be a busy month for U.S. PET resin producers, as demand skyrockets from the holiday lull for PET bottles, due in large part to COVID-19-related demand for bottled water and beverages and PET packaging used for countless other consumer goods.” Meanwhile, imported PET supply had tightened  due to higher ocean freight rates for imports from Asia and Europe.

Prices of ABS moved up a total of 15¢/lb between September and November and there was potential for another 3-5¢/lb being implemented in December or this month, according to RTi’s Kallman. In addition to price increases in benzene, butadiene and acrylonitrile, the key driver has been faster than anticipated recovery of demand since the third quarter for appliances and electrical/electronic equipment, as well as automotive. This led to escalation of ABS imports and domestic resin production.

PC Prices on the Way Up

Polycarbonate prices were flat through fourth quarter, but suppliers came out with increases of 9¢/lb for December, though it was more likely that they would be implemented this month, according to RTi’s Kallman. He noted that PC demand picked up pace in automotive, but also in construction, appliances and E&E sectors. Higher feedstock costs were also a factor to some degree. Lead times, particularly for PC compounds, were extended from eight to 10 weeks, with suppliers trying to play catch-up from the drop in demand in the first half of the year. In fourth quarter, demand appeared to be at least 10% above 2019, as restocking of supply chains was afoot.

Nylon 6 prices were on the way up at the fourth quarter’s end as suppliers sought increases of 10¢/lb for December, which appeared to have potential for success based on higher prices of benzene and caprolactam coupled with increased demand from automotive and the fiber/textile sectors, according to RTi’s Chesshier. She ventured that if feedstock prices and demand continue to move up, another price increase would not be surprising this month.

Nylon 66 prices were mostly flat in the fourth quarter but suppliers were seeking increases in the 14¢ to 20¢/lb range in December, which were expected to go through by this month, according to RTi’s Kallman. In addition to increased feedstock costs, the hikes were driven by increased demand from automotive which left some suppliers struggling to meet lead times, particularly for some nylon compounds. An unplanned “hard” shutdown due to a power outage at a Florida nylon 66 plant of fully-integrated supplier Ascend Performance was expected to further tighten supply.