Back in 2016, Tenere was a very different company and served a much different customer mix. At that time, the company’s Colorado operations included injection molder Mountain Molding, located in Longmont and acquired in 2015; rapid prototyper Protogenic, located in Westminster and acquired in 2013; and its original Colorado purchase—Denver Tool and Die of Lakewood, which it bought in 1995.

Tenere’s molding floor has 34 injection machines from 28 to 720 tons (three of them vertical presses), including Toshiba, Engel, Arburg, Toyo, and Nissei machines.

Those companies with disparate capabilities and locations would be combined into a new 135,000-ft2 facility in Westminster in 2016, the same year the company wound down business with 80 of its customers. Tenere, which was itself acquired by Massachusetts-based private-equity firm Watermill Group in 2012, is headquartered in Wisconsin, where it operates a sheet-metal fabrication business. In 2016, the company also opened a sheet-metal operation in Monterrey, Mexico. That facility has since quadrupled in size. Finally, in 2018, Tenere sold its rapid-prototyping division to Midwest Prototyping, which kept the operation in the new Westminster facility, leasing the space from Tenere.

After realigning its business and client list, Tenere used its metal and plastics capabilities to create enclosures, among other applications, for customers in cloud infrastructure (server racks and cabinets), network architecture (server chassis and network hardware), fiber optics (enclosures and boxes), renewable energy and autonomous transportation. 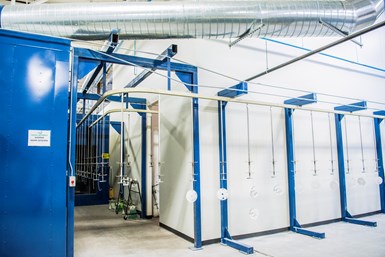 “If you look at us versus another injection molder, we don’t really go after the same customer base,” explains Brian Steel, Tenere’s CEO. “We’re seeing the play between metal and plastics, which probably a lot of people don’t see because usually you’re either in the metals business or you’re in the plastics business—you’re not in both.”

Having a foot in both worlds has been advantageous for Tenere helping it win—and keep—business it might have missed out on otherwise. Steel recalls a customer that had been sourcing an aluminum box from Tenere for the fiber market that decided to move to a molded plastic enclosure, which Tenere still makes. “If we were just a metal fabricator, we would have lost the business,” Steel says. “Even when it was a metal box, there was plastic inside it, and as a plastic box, there’s still a stamped metal tray inside.”

“We’re seeing the play between metal and plastics, which probably a lot of people don’t see because usually you’re either in the metals business or you’re in the plastics business.”

Steel estimates that about 40% of what the company molds in Westminster is tied to an integrated plastics and metal product, while fully 30% of its molded output actually ships to one of Tenere’s other facilities to get built into something else. So far, the recalibration of its operations and strategies to target such products has proven successful. “As we went into that intentional shedding of markets we didn’t want to play in, for the most part, we held our own,” Steel says, noting that plastics revenue held steady. In 2019, plastics was its fastest growing segment, rising by about 20%.

Intentionally targeting markets like autonomous vehicles, renewable energy and information technology opens up Tenere to sizable opportunity and risk. “Because we play in very dynamic markets with innovative customers,” Steel says, “the good news is they’re growing markets. They’re fast, and if we’re responsive, we’re going to capture market share—we’re going to grow. The bad news is a project can go from prototype to production in about 60 to 120 days. Depending on the program, it can ramp up to very high volumes, and it can turn off just as fast as it started.” 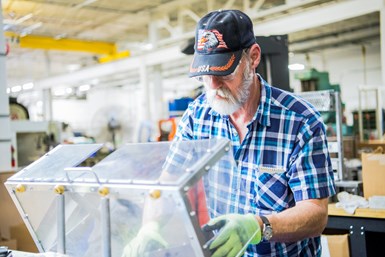 Tenere’s Westminster, Colo., operation has 125 employees and runs three shifts five days a week, with an additional three shifts over the weekend.

Steel offered a specific example of a project that started with a volume of 1500 parts per week before going completely silent for six months. The customer then came back and asked for production of 4000 a week. Tenere acquiesced, and the customer proceeded to ask for output increases to 7200 and then 10,000 parts per week over the next two months. “We said, ‘Yes,’ and ‘How long is it going to run?’” Steel explains. “We can’t get there without automation; we can’t get there without upping cavitation.”

Automation has become a big part of initial discussions with customers. Steel notes that three years ago, Tenere had robots on eight or nine of its 34 presses, and only three were being used. Today the company has 11 Yushin robots, as well as a collaborative robot (cobot) from Universal Robots, and it has hired three automation engineers (two in Wisconsin and one in Colorado) to design and implement automation cells, with plans to hire or develop internally automation technicians for support.

Tenere has embraced automation as a means to boost productivity, pairing a traditional three-axis Yushin robot with a UR cobot in this cell.

On the shop floor, there’s currently a cell consisting of four molding machines that are all connected via conveyors. The cell features the UR cobot as well as four Yushin three-axis robots. Tooling was switched from one to two cavities, and output for the overmolded trays was boosted from 60,000 to 110,000 per week, while required staff was reallocated from 12 to just three or one operator per shift. Return on investment came in just three months.

Three years ago, Tenere had robots on eight or nine of its 34 presses, and only three were being used. Today the company has 11 Yushin robots, as well as a cobot from Universal Robots.

Flexible automation is key for Tenere as it purchases new technologies for new cells. “Whatever we invest in, we have to be able to use it for something else if that project goes away,” Steel says. “We’re not going to invest in any technologies that we can’t repurpose quickly.”

Just as an improvement in automation utilization prompted the hiring of a new person for a new role in Westminster, Tenere’s vision of how it will gather, analyze and utilize data has led to the addition of another new person in another new role: data analyst. Steel says the company, which utilizes IQMS software, sees this as a logical progression of what most of the industry is already doing. “The base is taking operational performance data to make yourself better, whether it’s quality, safety or productivity,” Steel explains. “I think all of us in the industry have been there for a while to varying degrees. The next level is how do we use those data analytics to make smart decisions on what we invest in and when we invest in it, and then measure the outcomes.”

“With the dynamic nature of our customers’ programs, we are never going to build 1000 widgets an hour of the same product for the next 20 years.”

The ultimate goal is what Steel calls predictive analytics on demand. “We’re in a dynamic market serving innovative customers, working to help them improve their forecasting and planning process,” Steel says. “With the dynamic nature of our customers’ programs, we are never going to build 1000 widgets an hour of the same product for the next 20 years.” Eventually, Tenere hopes to use analytics to interpret customer demand signals. “That’s the holy grail we’re working towards,” Steel says. “Start with the base—how do we get better on the floor. Move to how do we use it to make better decisions internally and end with how do we add value to our customers.” 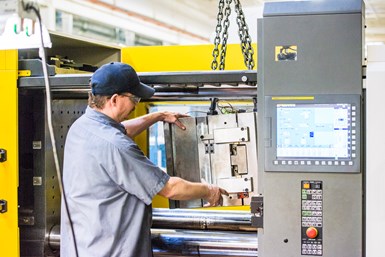 Tenere has a complete tool room in support of its roughly 500 active molds.

Ultimately, the value-add will be in Tenere better understanding its customers and its customers better understanding their own needs. “We’re really trying to use the analytics on customer demand signals,” Steel says. “How we’re responding to those internally and what we’re doing to drive supply chain and material flow, labor, and machine utilization—then what were the actual results of that demand signal.”