The pressing and evolving need for ventilators to help treat the most severe cases of Covid-19 has revealed both the complexity of the supply chain for such machines and the nimbleness of suppliers.

NPR’s Planet Money podcast used a recent episode to detail the challenge at hand for ventilator manufacturers like Ventec, which is working in conjunction with its normal vendors to ramp up production, as well as tasking wholly new suppliers with some of the needed production. Ventec’s ventilator is comprised of roughly 700 components sourced from 80 different global suppliers.

The Institute for Health Metrics and Evaluation (IHME; Seattle, Wash.) forecast that peak U.S. demand for ventilator use—19,481—will occur in the second week of April. IHME said that while it has not been able to estimate existing ventilator capacity, its model “suggests potentially large gaps in availability of ventilators,” adding that “currently, one of the largest constraints on effective care may be the lack of ventilators.” One issue is broad disparities in how many ventilators will be needed in different states, and when they’ll be needed. The study forecast median peak demand for New York of 4141 (with a maximum of 10,340) on the high end; at the opposite end of the spectrum: Wyoming’s median peak demand is forecast at 35—with a potential maximum of 44.

Stepping Up to a New Challenge

Facing idled demand from typical customers in a market like automotive, many companies with the knowledge, capacity and skill to provide similar components to a company like Ventec that they might make for a GM or Ford in non-pandemic times, are applying that expertise to a new market and application. 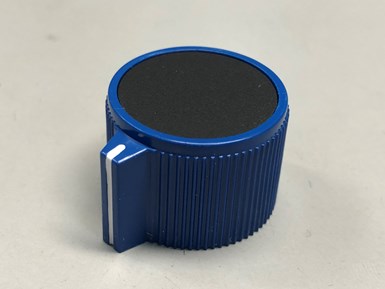 Rogan is making a round control knob with a white indicator line for an emergency ventilator order. The knob is insert molded from ABS on a 75-ton vertical Battenfeld rotary press .

Case in point: Rogan Corp. The manufacturer of customized knobs, fasteners and hand hardware, announced it will produce 500,000 parts to be used in the production for a couple hundred thousand ventilators. This is the result of “two significant orders” for Rogan, which the company began work on immediately.

Rogan told Plastics Technology that the part in question is a round control knob with a white indicator line. The knob is insert molded from ABS on a 75-ton vertical Battenfeld rotary press in a multi-cavity tool. After molding, the part gets drilled and tapped, and set screws are then placed in. The process is completed with two decorative inlays. Rogan expects to have the half-million part order completed by June.

In a release, Rogan said it is configuring its personnel and machinery in a way to maximize output. “With this order, we are actively planning ways to include more employees in the process, which will allow us to have two or three stations running at a time, providing plenty of capacity,” Dave Ziegenhorn, Rogan’s GM.

Rogan had received nearly 50 letters from its customers saying the company was essential to their production, allowing the Northbrook, Ill. manufacturer to stay open, despite the March 21 stay-at-home order issued by the state. On the whole, however, diminished or non-existent demand from customers shut down by the pandemic has forced Rogan to continually evaluate its situation. 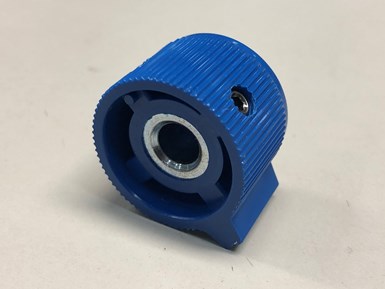 After molding, the ventilator knob gets drilled and tapped, and set screws are then placed in. The process is completed with two decorative inlays.

Despite staying open, Rogan said it feared possible slow-downs in production and the decisions that would have to be made as a result. “Being named as an essential business was a big boost for us,” Ziegenhorn said, “therefore we need to stay open. We were expecting a slowdown in production, and I was worried about the potential impact it would have on people that make Rogan what it is.”

Rogan has been able to hold onto all its employees, however, and this latest project is giving it a boost in multiple ways. “These are exciting times for Rogan as we support our customers, who are serving a critical role in helping to save lives through this pandemic and beyond,” Ziegenhorn said.

Superior Die Set (Oak Creek, Wisc.), a manufacturer of steel and aluminum products for the metal stamping, plastic injection molding, and forging industries, has also seen an increase in orders for components that are being used to manufacture ventilators, as some of its regular business hits the brakes.

Late in the afternoon on March 27, the company received its first order from Accro Tool and Manufacturing (Burlington, Wisc.) for a custom mold base to be used on a ventilator component. The typical lead time on such a piece would be five to seven work days, but Superior Die Set delivered that first order in less than two days. According to an email from Accro, because Superior Die Set was able to produce the part so quickly, Accro anticipated tool delivery on April 6.

Remaining in operation through the outbreak, Superior Die Set CEO Martin Girga said that thankfully none of the company’s employees has fallen ill, with 90% currently working from home. To avoid layoffs the company has taken various steps, including Girga taking a cut in his own pay. “My idea right now at this point is the business while it’s slowed down, it’s still healthy enough for us that we want to make sure we’re retaining employees as much as we can,” Girga said.

Superior’s Derrick Gilane (far left) stands with Beverly and Randy Boos of Accro Tool & Manufacturing, alongside the rapidly fabricated mold base that will help with ventilator supply.