The Plastics Engineering Technology program to benefit from the donation of a state-of-the-art two-ton variable speed air-cooled chiller.

Earlier this month the chiller installation was completed when the unit’s supply and return piping was connected to Pittsburg State’s three injection molding machines. Pittsburg State’s accredited Plastics Engineering Technology program plans to use the chiller extensively as part of its Advanced Injection Molding course. Additionally it will be used for other projects in the Plastics Processing Laboratory, such as blow molding and extrusion and as part of senior capstone projects. 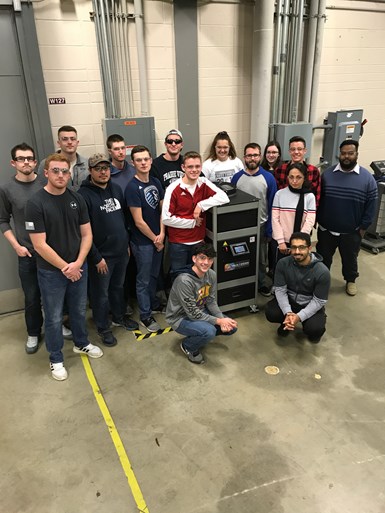 The students will be learning while benefiting from using a chiller with state-of-the-art capabilities, including Ethernet and adaptive controls, a 4.3-in. touch screen display, and extensive digital data collection. Professor Paul Herring comments, “Our students have been using the Delta T System and find it easy to understand and operate. The chiller is working perfectly with our system.”

Delta T Systems air-cooled chillers incorporate variable speed compressors that operate effectively between 10% and 100% of their rated capacity. So Pittsburg State’s chiller can operate very efficiently at full capacity as a two ton chiller, or at any lower chilling capacity, down to 0.2 tons, the company says.