Maguire extends its 100% Injection Coloring technology as an option for its MGF gravimetric feeders.
#kshow #color

Introduced in 2017 by Maguire-affiliated company Riverdale Global for its liquid-coloring equipment, 100% Injection Coloring is now an option for Maguire’s MGF line of gravimetric feeders, allowing them to meter in color during both the recovery and injection phases of the screw.

100% Injection Coloring, which has been extended to Maguire’s MGF line of gravimetric feeders, allows the feeders to receive signals from the injection molding machine during the screw’s recovery and injection phases.

Maguire notes that in an injection molding cycle, roughly 75% of resin enters the screw during the recovery phase with 25% coming during injection. Since conventional feeders only add color during recovery, insufficient mixing can occur. The problem can be exacerbated when the called-for shot size approaches screw capacity or if the end product is translucent. With 100% Injection Coloring, Maguire says a special controller on the MGF feeder is able to receive signals from injection press during recovery and injection.

Maguire says use of 100% Injection Coloring technology can obviate the use of traditional answers to insufficiently mixed compounds: use of an upstream pre-mixer or over-coloring. In the case of adding more colorant than is needed, in addition to higher raw material costs, this option is not typically possible with translucent parts. Maguire says that for conventional feeders, mixing time in the barrel is inadequate to color the 25% of barrel content that has not received any colorant directly. Over-coloring can be a fix, but not always, and especially not with translucent parts. In those cases, processors need to opt for a larger machine (with a larger barrel and shot size) or an upstream pre-mixer. Maguire announced the advance at K 2019 in Düsseldorf, Germany. 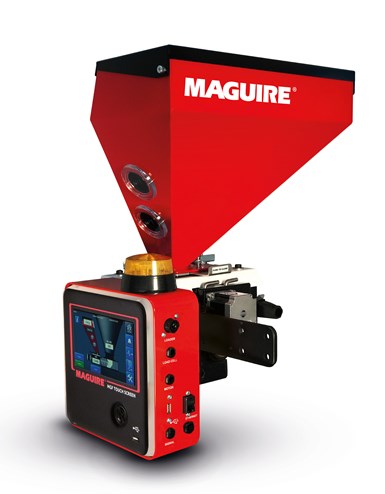 A special controller on the MGF feeder is able to receive signals from the injection press during recovery and injection.