A combination of continued strong demand and resin/feedstock supply constraints has kept prices rising for the five large-volume commodity resins. After a temporary dip, prices of PP and PET resumed their climb, spurred by tight supplies, a new PE force majeure, and a new upsurge in propylene monomer prices. Concerns over a predicted “above-average” active hurricane season also factored into continued supply allocations. Those are the views of purchasing consultants from Resin Technology, Inc. (RTi), senior editors from PetroChemWire (PCW), and CEO Michael Greenberg of the Plastics Exchange.

Polyethylene prices rose 9¢/lb for L/LLDPE and 7¢ for HDPE in April, following increases totaling 19¢/lb across the board in the first quarter. PE suppliers issued further hikes of 5-6¢lb for May, which were generally expected to succeed, according to Mike Burns, RTi’s v.p. of PE markets, as well as PCW senior editor David Barry, and The Plastic Exchange’s Greenberg.

While PE demand remained strong, tight allocations, shortages of several grades, and a new force majeure from Nova Chemicals, which further constrained HDPE and LDPE availability, left processors with little negotiating leverage in May, according to RTi’s Burns. He noted that, despite the general atmosphere of uncertainty, processors’ needs were generally being met. He said that going into June and July, key market indicators to watch for included removal of allocations and spot-market availability: “Changes in the secondary market will be a key driver of resin inventory recovery and potential price correction heading into the fourth quarter and first quarter of 2022.” 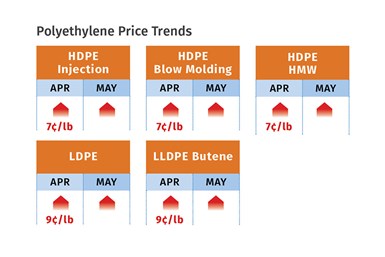 PCW’s Barry reported a gradual recovery in spot-market supply in the second week of May,  but noted that HDPE injection and blow molding grades remained very tight, with suppliers rebuilding inventories and holding customers to their allocations. “By June, he expected suppliers to have restored their inventories but would maintain the buildup in advance of a projected active hurricane season.

Greenberg reported that spot PE prices had recouped late-April losses and rose a couple of cents higher in May, with HDPE injection molding grades rising by over 5¢/lb, as a result of Nova’s force majeure, while most LDPE and LLDPE film grades became notably tighter and prices rose by at least 2¢/lb.

Polypropylene prices dropped 7¢/lb in April, reflecting a 13¢/lb decrease in propylene monomer tabs, offset by PP suppliers’ 6¢/lb margin increase, according to Scott Newell, RTi’s v.p. of PP markets, PCW’s Barry, and The Plastic Exchange’s Greenberg. Meanwhile, PP suppliers were seeking additional margin increases in the range of 5-8¢/lb in the May-June period. Newell expected to see overall improvements across the supply chain this month but noted, “We will not be out-of-the-woods, with resin prices likely to be firm to higher.”

Toward mid-May, Greenberg reported that a looming PP contract increase for May would outweigh the April decrease. He said the PP spot market had “reawakened,” with prices at least 4¢/lb higher. He also noted that spot monomer prices started to soar again, due to a combination of  the Colonial Pipeline shutdown, production problems at refineries and propylene plants, and greater demand from resin production and monomer exports. 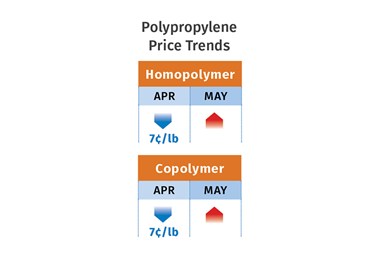 All three sources conceded that despite the startup of most PP reactors, most suppliers were still operating under force majeure conditions with resin allocations. While impact copolymer continued to be tighter than PP homopolymer, overall supply was improving across the board. PCW’s Barry reported that PP demand over the first half of this year remained strong despite PP suppliers’ aggressive pricing. He noted that there was some industry talk that buyers would pull back in May, particularly those from the automotive and appliance compounding segments.

Polystyrene tabs moved up 9¢/lb in April, following the 9-11¢ increases in March. Then suppliers posted whopping hikes of 15-17¢/lb for May, driven by benzene price volatility. Implementation was considered likely, depending on the May benzene contract settlement, by both PCW’s Barry and Robin Chesshier, RTi’s v.p. of PE, PS, and nylon 6 markets. Said Chesshier, “We are potentially looking at seven consecutive months of price increases, which is not sustainable for this market, with significant demand destruction as PS applications move to PP or PET.” 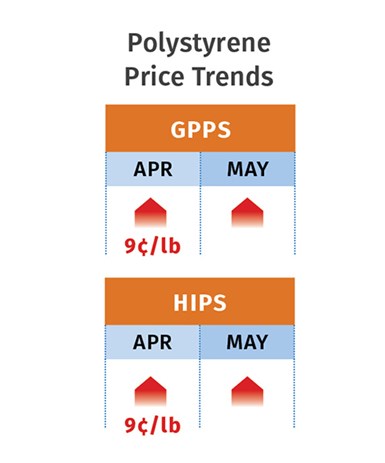 Both sources thought May would likely be the peak for PS prices, with some potential for reversal of that trajectory in June and July. Benzene jumped up to as much as $5/gal in April—about double the January level of $2.30-2.40/gal. U.S. supply was tight due to plant maintentance shutdowns, but both ethylene and styrene monomer prices were dropping. Going into the second week of May, the implied styrene cost based on a 30/70 ratio of spot ethylene/benzene was 55.8¢/lb, up 7.1¢/lb over the previous four weeks, Barry reported.

PVC prices moved up 4¢/lb in April, following a total increase of 14¢/lb in the previous two months. Suppliers were seeking another 3¢/lb for April,  according to Mark Kallman, RTi’s v.p. of PVC and engineering resins, and PCW senior editor Donna Todd. Kallman ventured that PVC prices could peak in May, noting that there was potential for some relief as spot ethylene prices were dropping. 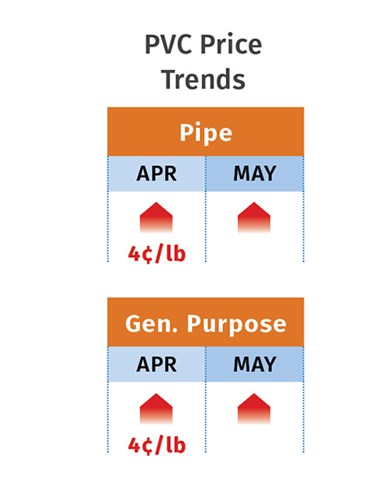 Both sources attribute the spike in PVC prices to tight chlorine supply, which reduced availability of VCM monomer, along with planned PVC maintenance downtime and the after-effects of the winter storm shutdowns. Todd reported that suppliers were telling customers that their force majeure declaration due to Winter Storm Uri would stay in place through May, at least, and even when rescinded, suppliers would continue to allocate PVC to customers through June. “Converters saw current allocation allowances at 80-90% of normal purchases. PVC supply was expected to remain tight through most of the third quarter,” Todd reported in the second week of May.

PET prices started May down about 5¢/lb from late April to the low 70s in railcars and truckloads delivered Midwest and South, as feedstock shortages eased in the aftermath of February's winter storms, according to PCW senior editor Xavier Cronin. However, by May’s end, prices were expected to rebound as much as 5¢ as demand for PET bottles remains robust in the aftermath of the COVID-19 pandemic. Cronin noted that high-volume purchasing of PET bottles and containers continues, especially from retail outlets and by emergency services and humanitarian agencies. Meanwhile, U.S. imports of PET resin from around the world have skyrocketed this year. In January and February, imports were 58% above the same period in 2020, according to the U.S. Census Bureau’s USA Trade Online. Imports have been priced in the high 60s to low 70s picked up at port of entry.