The 2019 Plastics Technology Top Shops Survey shows that for its highest-rated respondents, injection molding is just one element in a growing suite of services and capabilities offered to customers.
#bestpractices #topshops

The concept of a “shoot-and-ship” molder simply passing along parts directly from the tool cavity without any other intervention—be that assisting on the design up front or assembling molded parts into finished products on the back end—has long been quaint. More and more businesses that have “molding” in their name are likely to talk about being a “Contract Manufacturer” in the “About Us” portion of their websites, and for good reason. Many have long ago added numerous skills and capabilities beyond what happens between the press platens. Our new Top Shops benchmarking survey focusing on injection molders shows that for the top performers, the evolution beyond a shoot-and-ship plastic part purveyor into a customer’s full-spectrum product manufacturing and logistics partner has accelerated.

A word here about our methodology.  In addition to demographic data, the survey asked for information on some key performance metrics, including areas like sales growth, sales per machine and employee, scrap rate, and setup time, among others. Scoring on 10 of these metrics was used as a means to separate 2019’s Top Shops from the rest of the respondents. Many of the analyses below compare average results for these two groups.

When you focus in on the injection molding portion of the survey participants’ business, the profile of their machines reveals very similar fleets. Average machine age was 11 years for Top Shops and 12 for all others; machine orientation was 97% and 91% horizontal, respectively; and drive type was 63% and 70% hydraulic. Clamp-force range also saw striking parallelism between the two groups of survey participants. The broadest gap—four percentage points—came in presses over 1000 tons (13% for Top Shops and 17% for other participants). In the up-to-100 and 101-500 ton categories, only two percentage points separated Top Shops from other respondents; while in the 501-1000 ton range they both reported an identical 42% owning such machinery.

Axiom Group, one of the Top Shops of 2019, makes extensive use of automation for parts handling and secondary operations—key trends among our survey’s top performers.

The evolution beyond a shoot-and-ship plastic part purveyor into a customer’s full-spectrum product manufacturing and logistics partner has accelerated.

For the survey participants, the customer profiles were also mostly similar. Automotive (48% for Top Shops and 51% for others) and packaging (19% and 16%), as well as building & construction and military, which were identical at 32% and 23%, respectively, show the survey participants drew business from a fundamentally similar customer pool. There was some divergence among those serving consumer goods (Top Shops 65% vs. 51%), electrical/electronic (45% vs. 35%), industrial (52% vs. 44%) and medical (61% vs. 42%).

Even in the gamut of materials run, there was symmetry. Top Shops processed more PET and PUR and less PVC, but similarities were seen everywhere else. Parity was reported in polyolefins, engineering thermoplastics, TPEs, bioplastics and LSR, as well as recycled plastics, with roughly a third of both groups processing reclaimed resins. Top Shops did process more different types of resins, running an average of 51 different polymers in 2018 compared with 28 for the remaining respondents.

Divides widened in the value-added portion of the survey, where, for instance, 23% of Top Shops offered additive manufacturing vs. 12% for the rest of the survey participants. Similar gaps appeared in contract manufacturing (68% vs. 51%), inventory stocking/logistics (65% vs. 51%), and product shipping/packaging/labeling (81% compared with 68%).

Variation also appeared in training, where nearly 30% of Top Shops provided a minimum of 21 hr of training for shop-floor employees, compared with 11% of other respondents. The average hourly wage for non-management plant-floor employees was 10% higher at Top Shops, and the differences in benefits was much starker. By a two-to-one margin or more, Top Shops offered workers 401K plans, bonuses, safety/health programs and education reimbursement, with four times as many providing apprenticeships, leadership development, profit/revenue sharing and certification. Perhaps not surprisingly, the turnover rate at Top Shops was more than 40% lower than at other respondents.

Turnover rate at Top Shops was more than 40% lower than at other molders.

Communication for the Win

With all molders staring down similar market challenges, and armed with a similar technology arsenal at their disposal, differences in performance often come down to business strategies and tactics. The survey revealed stark discrepancies in business practices between the two groups. For instance, 71% of Top Shops undertake a regular review of business compared with just 25% of the rest of respondents. Similar gaps were seen in business-metric goal setting (71% vs. 28%), business-strategy development (74% vs. 23%) and occurrence of regular management and department-head meetings (68% vs. 39%). 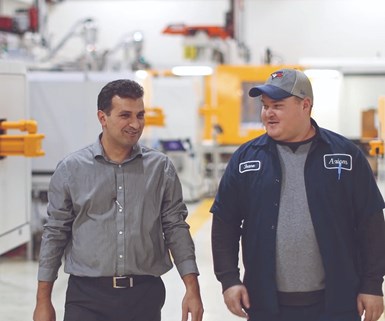 Two employees perform a process walk at Axiom. The company conducts layered process audits each shift by production personnel; weekly by supervisory people; every month by management; and quarterly by members of its executive team.

Conversations with some of this year’s Top Shops revealed that regular meetings, and the communication that happens within them, were a key component of success. Pete Klahorst, managing director of Shape Plastics, Grand Haven, Mich., laid out daily, weekly, monthly and quarterly confabs at his business. In a daily standup meeting, participants talk about one thing they will do that day to improve Shape’s KPIs (key performance indicators), while a weekly DMAIC (define, measure, analyze, improve & control) discussion seeks to solve bigger problems with cross-functional teams. “We also have monthly town halls where we will communicate our progress on our KPIs on a plant level,” explains Andy Rosenberg, plant manager at Shape. “Then we also have quarterly bonus meetings where all of the plant comes and reports out on the metrics and KPIs.”

Many businesses use the phrase “open-door policy” to encourage communication, particularly between shop-floor staff and management, but for Chris Moschopedis, v.p. of corporate strategy at Axiom Group in Aurora, Ont., a truly open door involves more than a literal door. “We’re learning through some recent events that just having your door open isn’t the only thing,” Moschopedis says. “When you walk by someone and say, ‘Hey, how’s it going? Great!’ and walk away, versus, ‘Hey, what are you working on? Any challenges with that? How can I support you? Is there anything that’s preventing you from being successful or achieving your objectives?’ That’s a different set of questions.”

Philip Katen, general manager and president of Plastikos Inc. in Erie, Pa., notes that all three of that company’s owners and most of its managers are engineers, so they inherently love numbers and insightful metrics—figures they regularly share with staff. “We believe that the open communication aspect of the process is very important to further grow and develop trust, transparency and accountability throughout the company,” Katen says, “which in turn should also strengthen the buy-in and commitment among all members of our team.”

“We believe that the open communication aspect of the process is very important to further grow and develop trust, transparency and accountability throughout the company.”

At Shape, continuous dialogue also requires consistent respect. “What that means is, we’re not always going to agree, but when we have robust dialogue, it’s always done from a place of respect,” Rosenberg says. “We value peoples’ opinions and inputs, so I think that kind of resonates out there in the community.” 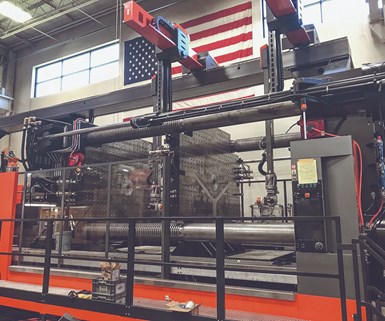 If these Top Shops have managed to differentiate themselves from their molding peers, what makes them stand out from others is their people; and finding and keeping those people comes down to more than money. “As a company, we can’t always buy an employee,” Moschopedis says. “We have Magna up the street—there’s big OEs and Tier Ones that are multibillion-dollar companies—and sometimes you can’t just pay more. We’d rather be the employer of choice, so if you’re a twenty-something and you think, ‘Well I’m in the manufacturing industry; I’m in plastics; why not choose Axiom? They have a development program; they recognize their people; they share profits—things like that.’ For the young kids, that’s worth a lot more than another two to three bucks an hour.”

In addition to demographic data, our Top Shops survey asked for information on some key performance metrics, including areas like sales growth, sales per machine and employee, scrap rate, and setup time, among others. Scoring on 10 of these metrics was used as a means to separate 2019’s Top Shops from the rest of the respondents. Many of the analyses below compare average results for these two groups.