Part 3 of 6: Fundamentals of Polyethylene

PE parts can fail when an inappropriate density is selected. Let’s look at some examples and examine what happened and why.
#polyolefins #bestpractices

The importance of the density of polyethylene materials can be understood by reviewing applications where parts fail when an inappropriate density is selected. In this installment we will begin to look at some of these. Interestingly, all these field failures are related to the selection of grades of polyethylene that have a density higher than what ends up being appropriate.

The first of these is a relatively mundane application, a molded brush that is a component in a cup dispenser. While it may seem quaint now, in the 1970s this was a big deal, especially for the company that designed and patented the part and particularly since it was designed by the founder and chairman of the company.

The part was molded in an eight-cavity tool. The part came out of the mold as a flat strip with brush bristles protruding from the base at regular intervals. During assembly the part was simply bent into a circular shape that fit into the lower portion of the cup dispenser. The claim to fame of this part was that the brush bristles guaranteed that only one cup would be dispensed at a time. Consumers were easily impressed in the ’70s.

The mold was moved to a different supplier, and the part drawing simply called out “polyethylene.” When the molder inquired about the desired density, the buyer at the cup company had no idea and did not seem to care much about anything but the price of the item. At that time, this particular supplier was molding a lot of 5- and 2-gal pails and they were getting a very favorable price on the material. So, samples were molded in this material, which was an HDPE with a melt flow rate of 7 g/10 min and a density of 0.952 g/cm3. The parts molded well and fit the assembly properly, the buyer and the quality people at the plant to which the parts were being shipped signed off, and production began.

Several months later one of the assemblies made its way to headquarters, where the company founder had a chance to try it out. He was not pleased. The brush bristles were too stiff, making it more difficult to pull the cup out of the dispenser. Worse yet, it was possible to pull on the stack of cups in such a way that two cups might come out at the same time instead of the desired one. Shock waves reverberated through the organization and eventually reached the molding facility.

HDPE has a higher degree of crystallinity than LDPE. This results in improved load-bearing properties such as strength and stiffness, but it reduces ductility.

Given the feedback, it was quite simple to correct the problem. An LDPE was purchased and peace returned to the realm, although not without a spirited discussion about what to do regarding the hundreds of thousands of cup dispensers that has been shipped with the HDPE brushes. It was discovered subsequently that the HDPE brushes exhibited a more troubling behavior over time. With repeated use, the bristles began to break off of the base strip. This obviously affected the functionality of the part and created the potential for pieces of PE to fall into the dispensed cup. I never heard of any reports of consumers ingesting pieces of PE, but one can imagine how this would have played in today’s world of online reviews and instant customer feedback.

The change in the behavior of the molded part as the density of the material was altered provides for an instructive illustration of the effect that density has on mechanical performance. HDPE has a higher degree of crystallinity than LDPE. This results in improved load-bearing properties such as strength and stiffness, but it reduces ductility. In addition, HDPE provides a harder surface and has higher opacity than LDPE for any given wall thickness. And while this particular part was always used at ambient conditions, the temperature-dependent behavior of HDPE and LDPE also reflect the differences in molecular structure. HDPE maintains a higher percentage of its room-temperature performance at elevated temperatures, and the melting point of HDPE is approximately 30o C (54o F) higher than that of LDPE. However, LDPE can be used at lower temperatures without becoming brittle. 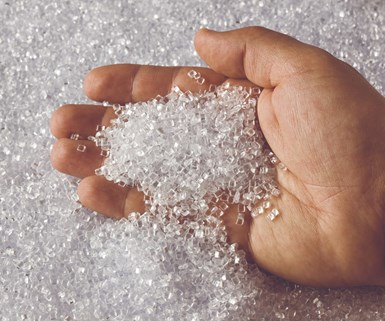 Even a small difference in density can have a major effect on performance properties of PE. For example, the small amount of color in a carrier resin in a color concentrate, of a different density than the base resin, can effect the overall properties. (Photo: ExxonMobil)

Differences in performance can be observed even when relatively small changes in density are made. Often these changes are made unwittingly. Several years ago, we worked with a client on a PE part made of a grade with a density of 0.962 g/cm3. This is at the upper end of the density spectrum for polyethylene. In this case the part was under constant stress in an assembly and a small percentage of the parts developed cracks over time, causing a valve to leak. An examination of fractures showed that the mechanism was environmental stress cracking (ESC). It was discovered that the cracking process could be accelerated by exposing the assembly to certain types of soap solutions, which act as stress-crack agents for polyethylene. When this was done to unassembled parts, the level of failure was less than 1%. But once in the assembly and under the influence of the associated stresses, the failure rate increased to over 25%.

The carrier resin used to make the concentrate can alter the properties of the base resin … for better or worse.

ESC is a mechanism that is typically observed in amorphous polymers, and we learn from observation that amorphous polymers are much more susceptible to this failure mechanism than semi-crystalline polymers. Given this knowledge, it is counter-intuitive that higher-density PEs, which are of higher crystallinity, are more susceptible to ESC failure than lower-density grades. But that is, in fact, what we observe. In this case, a customer demand led indirectly to a solution. The parts had always been molded from the natural, unpigmented material. A customer of my client requested that a select number of the polyethylene parts be colored. Molded-in color is often considered to be something that requires no real thought process beyond matching the color. Once everyone has agreed on the color, a concentrate is manufactured and added at a particular letdown ratio. But the carrier resin used to make the concentrate can alter the properties of the base resin … for better or worse.

In this case, it turned out to be for the better. It was noted that colored parts never came back from the field exhibiting cracks, and when the soap solution test was performed on these parts, no cracking was observed. When the density of the colored parts was measured, the result was 0.953 g/cm3. At first it was thought that the base resin being provided was not within specification. Polyethylene suppliers can typically hold the density of any given grade to ±0.002 g/cm3of the nominal specification. In this case the culprit was the concentrate.

The carrier resin for the concentrate was an LLDPE with a density 0.920 g/cm3. When added at the prescribed letdown ratio, it reduced the density of the base resin and coincidentally solved the ESC problem. Realizing that the part still functioned mechanically even with the associated reduction in strength and stiffness, the solution to the cracking problem was obvious.

In our next column we will look at a case study from almost 20 years ago where a historically successful grade of PE was phased out and replaced with a higher-density grade that unleashed a significant field problem.

About the Author: Mike Sepe is an independent, global materials and processing consultant whose company, Michael P. Sepe, LLC, is based in Sedona, Ariz. He has more than 40 years of experience in the plastics industry and assists clients with material selection, designing for manufacturability, process optimization, troubleshooting, and failure analysis. Contact: (928) 203-0408 • mike@thematerialanalyst.com.