What to See at NPE 2006: Chemicals and Additives

Compounders, molders, and extruders will be treated to a wide range of new additives at NPE 2006. Although new colorants are the most numerous, you’ll also find novel fillers and reinforcements, blowing agents, coupling agents, mold releases, and purging compounds.

Among the more interesting developments is the first “hyper-nucleating” agent specifically for PE from Milliken. Designed for blown film, Hyperform HPN-20E can be used to nucleate LLDPE as a more efficient, easily handled alternative to blending LDPE with LLDPE. Improved moisture barrier is a side benefit.

What’s With All the Static?

A unique slip additive in pastille form for PET and PBT film, sheet, and injection molding will be introduced by Croda Inc. Incromax PET 100 is said to reduce coefficient of friction at very low addition levels.

Wacker Silicones is introducing two unusual additives. Genioplast ultra-high-molecular-weight silicone gum is supplied in a pellet form for use as a coupling agent and flow modifier in PP, PE, PC, ABS, nylon, PVC. Wacker says it was never possible to incorporate silicone fluids at such a high level in a pellet additive. And its Cavamax starch-based cyclodextrin modifier reduces taste and odor in food packaging by absorbing offending chemicals.

Also unusual is the new Polymag magnetic additive from Eriez Magnetics ’ new Polymag Div. This metal powder is added to one component in a multi-material part to permit efficient magnetic separation and reclaim of both resins.

Two-year-old Bio-Tec Environmental is featuring its Bio-batch biodegradeable additive masterbatch that enables microorganisms in the environment to metabolize polyolefins, PS, and PET within one to five years.

Among the new entries in colorants, Teknor Color is introducing Tekpro Construction Color mini-bead concentrates in 14 hues for building products from cove bases to decking and fencing.

PolyOne is launching ProTint and ProTint Plus colorants for tinting and enhancing the transparency of PP for food packaging and infant and pharmaceutical products.

A host of new special-effects pigments and FDA-approved grades are being introduced by Dayglo Color, Delta Colours, Silberline , and EMD Chemicals Inc., while Gharda Chemicals, an Indian producer of high-performance pigments, is launching its colorants business in the U.S.

Some new additives are aimed at two of the most active fields of compounding R&D. Nanocor, Inc. is featuring its new nanoMax series of nanoclay-polyolefin masterbatches containing 40% to 60% of the company’s nanoclays. Amounts as low as 2% to 8% reportedly improve flame resistance and mechanical properties, respectively. Sud-Chemie is also exhibiting nanoclays at the show. And Kenrich Petrochemicals has new Ken-React/QB 046, a blend of titanates said to exfoliate nanoclays in plastics such as PP.

A novel foam stabilizer for wood/plastic composites is being launched by Reedy International. Saftec AS is said to improve fiber dispersion and allow for high loading levels of wood without burning or charring.

Processors looking to avoid wasting high-priced resin have a host of purging compounds to consider. New ones are being introduced by Bricor Products and Chem-Trend, while other exhibitors of purging agents include Asaclean, Dyna-purge, Neutrex , Polyreps, Slide Products, and Spartech. 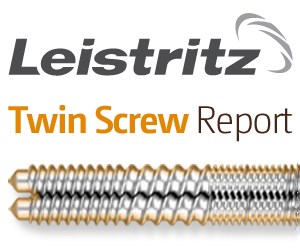