Prices Bottom Out for PE & PP? Up for PS, Flat-to-Down for PVC & PET

By the end of the first full week of 2020, it appeared that prices of both polyethylene and polypropylene may be bottoming out, with domestic prices generally in parity with global polyolefin prices. Crude oil prices moved higher in the first week of January amid escalating tensions in the Mideast, which helped feed into international market sentiment that PE and PP prices had reached a bottom.

Meanwhile, prices of polystyrene were expected to move up driven solely by higher benzene prices, while PVC and PET were on a flat-to-down trajectory.

Here’s a look at how our industry colleagues with pricing expertise view things for each of the top  five commodity volume resins. They include purchasing consultants from Resin Technology, Inc. (RTi), Fort Worth, Texas; senior editors from Houston-based PetroChemWire; and CEO Michael Greenberg of the Plastics Exchange in Chicago.

PE: Prices in December were flat although there were negotiated discounts of as much as 3¢ reported in the industry, according to both Mike Burns, RTi, v.p. of PE markets, and PCW’s senior editor David Barry. They estimate that PE prices in 2019 dropped 3-6¢/lb. Meanwhile, suppliers were out with increases of 4-5¢/lb, effective January. 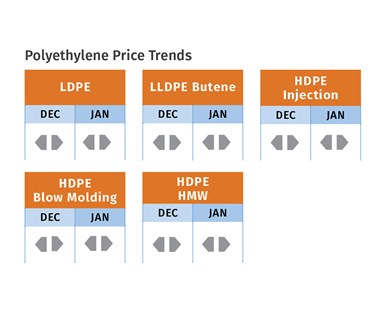 Meanwhile, the Plastic Exchange’s Greenberg ventures that a January price hike may be viable, noting that the PE spot market started the year strong, with transactions completed in most commodity grades, some with high volumes. “Our spot PE prices lifted a penny across the board as the New Year rang in, just as bullish market forces became more prevalent.”

While both Burns and Barry venture that PE prices are bottoming out, they see January prices remaining flat with suppliers more aggressively aiming to implement their increases in the February-March time frame. Burns noted that exports constraints due to the ‘early’ January Chinese New Year may keep inventories ample in first quarter.

PP: Prices dropped last month by 2¢/lb, in step with propylene monomer, with a further non-monomer reduction of 3.5¢/lb, according to Scott Newell, RTi’s v.p. of PP markets. He notes that between June to year-end 2019, there were 7¢ of non-monomer related PP prices decreases, adding that the spread between PP and propylene monomer had shrunk by 7¢/lb. Both Newell and PCW’s Barry, note that most of this reduction took place within the Nov.-Dec. time frame, with significantly discounted prime resin spot deals also taking place.

Barry and the Plastic Exchange’s Greenberg said PP spot prices dropped 12-15 ¢/lb through last year. Said Newell, “When all the numbers are in for 2019, it will show that demand wasn’t so bad because these deals were so good…but I think that that activity will ‘steal away’ from first quarter demand.”  These sources also note that exports sales during that same time frame were also very good, which speaks to the fact that there was oversupply or “distressed sales” as Newell puts it. While their sources venture that PP prices may have bottomed out, they concede that demand is still week, with 37-38 inventory days despite suppliers’ inventory draws late last year. 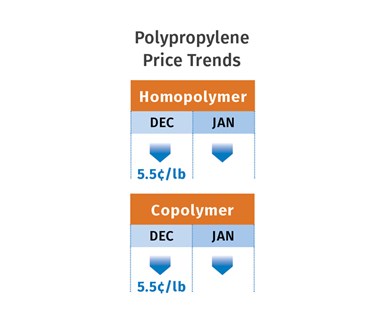 Greenberg reports that the PP spot market began to ramp back up just as the calendar turned to 2020. “There were some well-priced railcars that hung over from December and were simply snatched up by buyers; other processors required truckloads for quick shipment as their inventories dwindled into year-end. Considering the uncertainty in the Middle East and new highs in Crude Oil prices, which could trickle into resin, some processors have started to rebuild their inventories, citing low-cost opportunity vs potential upside risk—we tend to agree.”

PS: Prices were flat in December, following a 3¢ drop in November, but suppliers are out with a 3¢/lb price increase, effective January 1. The move was precipitated by a 22¢/gal increase in benzene contract prices, which equates to a 2¢/lb increase on PS production costs, according to both Robin Chesshier, RTi’s v.p. of PE, PS and nylon 6 markets and PCW’s Barry.

Says Chesshier, “This is the suppliers opportunity to try and increase their margins,” noting that butadiene contracts also settled up by 5¢/lb, giving suppliers some momentum. But she also pointed out that prices of benzene, which represent 75-80% of styrene monomer, have had no real effect in pulling up prices of the monomer, which stood at a low contract level of 41¢/lb, with spot prices at 37¢/lb. According to Barry, the implied styrene cost based on a 30/70 ratio of spot ethylene/benzene was at 29.1¢/lb, up 3¢/lb over a four-week period. Barry also reports that the calendar average for December 2019 spot general-purpose PS was 68¢/lb railcar delivered, down 9.3¢/lb, and spot HIPS was 72¢/lb, down 10.7¢/lb from December 2018. 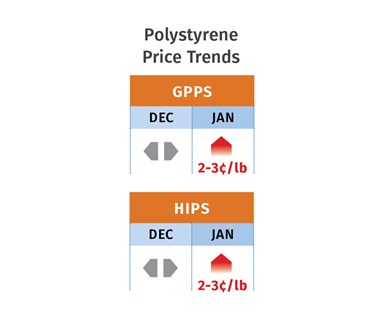 Meanwhile, Chesshier notes that major plastic indexes CDI and IHS Markit have made significant downward non-market adjustments to PS and styrene monomer, respectively. CDI posted GPPS, down 38¢/lb and HIPS, down 40¢/lb; IHS posted a 15% reduction for styrene—a 13.31¢/lb drop. Says Chesshier on the PS adjustment,  “This is one of the highest non-market adjustments in 10 years…when you tell the market that prices are off by that much, it causes a lack of confidence.” She saw this move as making things challenging and complicated for PS processors.

PVC: Prices were expected to be 2¢/lb lower within the November-January timeframe as spot ethylene prices were dropping and contract prices are generally expected to settle down by 2¢/lb, which equates to a 1-1.5¢ in PVC production costs, according to  Mark Kallman, RTi’s v.p. of PVC and engineering resins. This, along with slowed demand and reduced production rates. Meanwhile, suppliers are out with price hikes of 3¢/lb, effective Jan. 1. 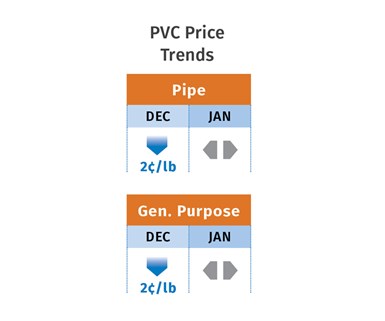 Kallman sees the move as suppliers setting the stage for regaining what they appear to be losing within early first quarter. Similarly, in her last 2019 report, PCW Senior Editor Donna Todd noted that suppliers were hedging their bets against the price drop with their new increase. “PVC suppliers, who have always been quick to point to ethylene pricing when they think it will help them push prices higher, will be facing a strong headwind early next year. By Dec. 19, the spot price had fallen to 15.5¢/lb, a drop of 13.5¢/lb.” She further noted that more pressure was underway with Sasol announcing that its Lake Charles, La. cracker had undergone a successful catalyst replacement, and that operating rates were already up by 85-90% of nameplate capacity and on the increase.

PET: Prices ended 2019 at 48¢/lb for railcars delivered east of the Rockies, down 17¢ or 35.4 % from the end of 2018, according to PCW Senior Editor Xavier Cronin. Prices started 2020 flat with weak demand as buyers assessed how much PET they will need over the next three months ahead of the warm-weather season, which typically brings a rise in demand for single-use PET in North America. Cronin noted that first-quarter 2020 spot PET resin business was done in the high 40¢ range for railcars delivered to end users and distributors.

PET has been oversupplied with U.S.-produced resin and robust volumes of PET imported from around the world. At the same time, demand dropped as U.S.-based consumer brand companies using PET to manufacture bottles, containers and packaging sourced more recycled PET than in 2018. 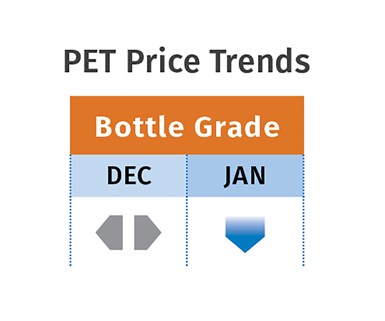 For its part, rPET clear FDA letter of non-objection repro ended 2019 at 64¢/lb down 9¢/lb or 14%, while U.S.-produced offgrade PET resin started 2020 at 45¢/lb railcar delivered east of the Rockies; imported offgrade PET was available in late December in the low 40¢/lb range delivered Southern California in supersacks.