Prices of Volume Resins Bottom Out

Increased exports, higher prices for feedstocks, and a slow ramp-up of production of industrial and durable goods are projected to stabilize resin prices and put upward pressure on PE and possibly PVC.
#polyolefins #polystyrene #pet

Moving toward the third quarter, prices of volume commodity resins generally appeared to have bottomed out, though there was potential for some further downward movement for PS, nylon 6 and perhaps PET. In contrast, upward movement for some resins is also likely with the return of the Chinese export market, for which a significant volume of domestic supply is dedicated. For example, 40% of domestic PE production and 30% of PVC is earmarked for export to China. The combination of higher exports, increased costs of feedstocks such as ethylene, and the throttling back of resin production contribute to the potential for price increases. Additional factors are the slow ramp-up of production of industrial and durable goods that had been suppressed by coronavirus pandemic, along with potential increases in crude-oil prices, and what is expected to be an abnormally active Atlantic hurricane season.

These are the views of purchasing consultants from Resin Technology, Inc. (RTi), senior editors from Houston-based PetroChemWire (PCW), and CEO Michael Greenberg of The Plastics Exchange.

Polyethylene prices remained unchanged in May, following a 4¢/lb drop in April, but suppliers came out with a 4¢ increase for June. Spot-market prices moved up by mid-May due to tight availability and a strong export market to China, according to Mike Burns, RTi’s v.p. of PE markets, PCW’s senior editor David Barry, and The Plastic Exchange’s Greenberg. 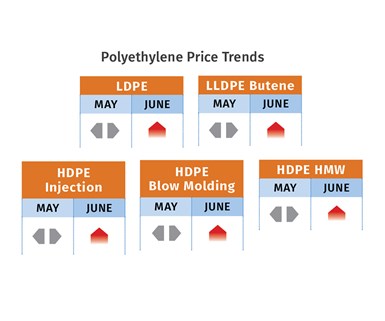 Both Burns and Greenberg thought the 4¢ hike had some potential to take effect in June. However, PCW’s Barry did not see it as a “slam dunk,” noting that a partial increase and only for some grades was more likely, but he suspects that another increase will surface for July. He confirmed that spot prices were closing the gap with prime material—now at 6¢ to 7¢/lb vs. a more typical 8-10¢. Both Barry and Burns attribute supply tightness partly to suppliers “quietly” slowing production. Greenberg expected spot prices to move up by the second week of June, despite uncertainties in the market: “Some who sensed the upward price momentum bought extra resin fearing that this would be their last chance at these stellar prices, while others, still reeling from demand loss, decided to wait, not because of price, but rather uncertainty regarding future business.”

Burns said domestic demand for “essential” PE products (as defined in COVID-19 terms) got even stronger in May, and “non-essential” products started to pick up faster than might have been expected. As examples, he noted that production at a maker of outdoor plastic furniture dropped 50% between mid-March and mid-April, then shot upward by end of May to 95% of normal. Similarly, a shrink-wrap film maker lost business from the automotive sector but was sold out for wrapping water bottles. He characterized this as “recovery demand,” noting, “June will be an interesting month. It will depend on whether we see an uptick of coronavirus cases and where.” Moreover, both he and PCW’s Barry cited NOAA’s Climate Prediction Center, which expects above-normal activity for the 2020 Atlantic hurricane season, June 1 to Nov. 30.

Polypropylene prices in May were flat, in step with propylene monomer contracts, and were expected to follow the monomer in June and July—flat or at most 1¢/lb up or down, according to Scott Newell, RTi’s v.p. of PP markets,  PCW’s Barry, and The Plastic Exchange’s Greenberg. They cited improved availability and demand in the spot market, along with attractive pricing.

“The PP market relies on the domestic market for the vast majority of sales, quite different from PE which exports some 40% of production. With so many domestic processing facilities temporarily shut, the PP market has struggled during the pandemic period and April sales were the lowest since February 2018,” reported Greenberg. 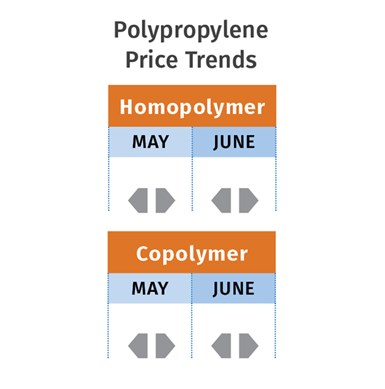 According to these sources, suppliers had reduced production rates to 80% of capacity or lower by the start of June, though upstream inventories were still building, albeit from historic low levels. Said Barry, “I don’t see production rates going back up to the previous 95% levels any time soon.” Added Newell, “Processors were heavy on inventory in May which could last them twice as long as is typical.” These sources also project a gradual ramping up of production through the summer. By early June, automotive and other durable-goods manufacturing was starting to come back, but Newell noted that that PP manufacturing had dropped by 50% between mid-March and mid-April. “We’re still about 30% below plan. There is a lot of uncertainty across the supply chain in the ‘non-essential’ products area, including staffing shifts.”

Polystyrene prices dropped 3¢/lb in May, following the 9¢/lb decrease in April, as benzene prices dropped from $1.21/gal to 95¢/gal. While PCW’s Barry thought prices in June, and possibly July, would be flat, Robin Chesshier, RTi’s  v.p. of PE, PS and nylon 6 markets, saw another price drop of 1¢ to 2¢/lb as likely because processors would seek further price concessions. She noted that in April to June, prices of all PS feedstocks dropped by 17¢ to 20¢/lb, while suppliers had reduced PS prices by only 12¢/lb. 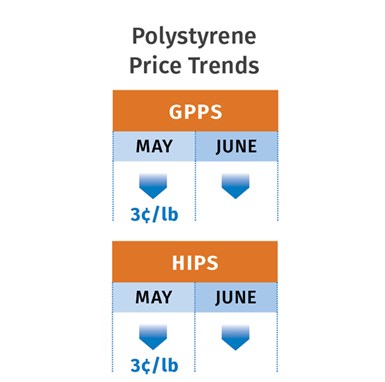 Both sources ventured that a price hike was likely to surface in July, with suppliers citing an uptick in costs of raw materials—primarily ethylene and benzene—along with some modest demand recovery. The implied styrene monomer cost based on a 30/70 ratio of spot ethylene/ benzene was at 12.8¢/lb in early June, up 1.1¢/lb over the previous four weeks.

PVC Prices Down for Now

PVC prices dropped 5¢/lb in April and were expected to drop another 2¢ to 3¢/lb in May, according to both Mark Kallman, RTi’s v.p. of PVC and engineering resins, and PCW senior editor Donna Todd. Nonetheless, suppliers issued a 3¢/lb hike for June, and soon added another 3¢/lb for July. Demand in the construction sector dropped by over 30% going into June, while medical, e-commerce and retail sectors held up relatively well, according to Kallman. He predicted that suppliers would succeed in pushing through the July increase, noting that they had cut back on production while export markets had strengthened and ethylene prices were moving up. 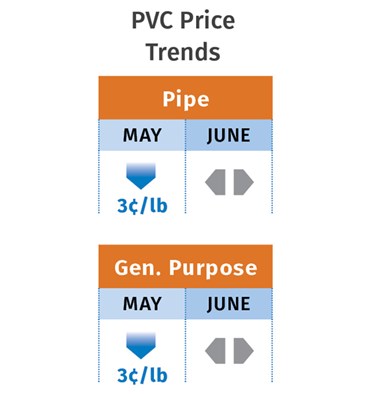 Late-settling May ethylene contract prices rose 3.5¢/lb, which represents an increase in the cost to produce PVC of about 1.68¢/lb, reported Todd. She also noted that about 30% of domestic PVC production goes to exports, whose prices have moved up substantially. Combined, those two factors could impact domestic prices. It remained to be seen whether suppliers would succeed in implementing the 6¢/lb increases already on the table.

PET resin prices stagnated by the end of May in the low 40¢/lb range due to an oversupply of imports and robust domestic production, according to PCW senior editor Xavier Cronin. By the first week of June, some off-grade spot resin was selling in the high 30¢/lb range. Typically, lower-priced PET can be found on the U.S. West Coast where many imports from Asia land, Cronin noted. 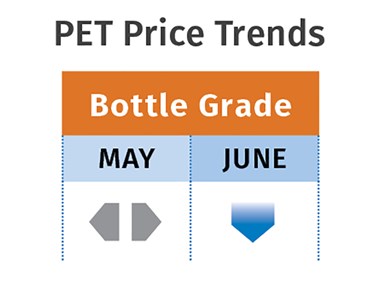 Prices for domestic prime resin were expected to be steady in the low 40¢/lb range for railcars (190,000 lb) delivered Midwest and South. Said Cronin, “Traditionally, PET prices peak for the year in July during the period of heavy bottled beverage and water consumption. But with the COVID-19 situation keeping beach crowds to a minimum, demand is expected to be weak compared with July 2019.” He ventured that July PET prices would be flat if not down.

Prices of ABS between March and the end of May dropped 5¢ to 10¢/lb due to a drop in demand during the coronavirus lockdown, and to availability of well-priced imports, according to RTi’s Kallman. ABS prices were likely to remain flat through June and July. Said Kallman, “The ABS market is at the bottom. When feedstock prices start moving up, we’ll see an upward movement, but we’re two to three months away from that.” He expected a slow recovery to take place in the automotive, appliance and electronics sectors for this globally well-supplied market.

PC Prices Drop Then Flatten Out

Polycarbonate prices dropped by at least 5¢ to 10¢/lb through much of the second quarter. RTi’s Kallman predicted that PC prices would be flat to lower in June and July. “The overall market is reaching the bottom. Feedstock prices have dropped and suppliers have reduced production output due to the slowdown in automotive and construction sectors,” said Kallman. The one bright spot has been the PC sheet business, due to strong demand for clear separation barriers, face shields and other personal protective applications, though that business has not been enough to offset lower demand from the major market sectors.

Nylon 6 prices dropped by 5¢/lb in April, following the historic drop in benzene prices along with lower prices of all key feedstocks. RTi’s Chesshier expected May nylon prices to fall another 5¢/lb, followed by relatively flat pricing in June and July. She expected that prices are likely to stabilize late in the third quarter as automotive, carpet and textile markets start ramping up. Even if demand improves, suppliers will not be able to raise prices in this well-supplied market, Chesshier ventured.

Prices of nylon 66 dropped 5¢ to 10¢/lb through May. RTi’s Kallman ventured that prices would be flat to lower in June and July. Nylon 66 suppliers have throttled back production by as much as 50% owing to the drop in demand, particularly from the automotive sector. Kallman expected a slow recovery.