Continued strong demand and supply constraints in feedstocks and/or resins drove prices of PE, PS and PVC sharply up  again, with prices of PET also higher. That supply/demand scenario applies even more so to PP, but monomer dropped by nearly 20¢/lb and PP followed suit to a point, as suppliers continued to issue monthly non-monomer price hikes.

Some “price corrections” are likely this month or next as recovery of supplier inventories is expected for all the largest-volume commodity resins, except for PP. These are the views of purchasing consultants from Resin Technology, Inc. (RTi), senior editors at PetroChemWire (PCW), and CEO Michael Greenberg of The Plastics Exchange.

Polyethylene prices moved up 7¢/lb in March, and suppliers were seeking another 7¢ to 9¢/lb for April, for which implementation was likely, according to Mike Burns, RTi’s v.p. of PE markets, as well as PCW senior editor David Barry and The Plastic Exchange’s Greenberg. Noting that since the market bottomed out in the second quarter of 2020, contract prices rose by 43¢/lb (19¢ of that in first-quarter 2021), Greenberg reported that spot prices rose well beyond the contract increases (as much as 10¢/lb more), particularly after the mid-February Gulf storm. “It seems that this unique environment could set up a more gentle softening of prices rather than a fiery crash off a cliff. This past week’s activity and demand surge confirmed our feeling that this market is not out of the woods yet,” he reported in the first week of April.

This month appeared likely to be more stable, as all three sources expected suppliers to complete their inventory recovery from the February storm later this month. Said Burns, “May will start to show more normalcy, but don’t expect prices to drop.” In fact, he did not foresee much price relief until after September. He said that PE suppliers ought to be paying attention to their customers’ credit concerns, noting that processors are paying nearly double for a resin railcar versus one year ago. “While it appears that the big-box stores have not been passing on the price hikes during the pandemic, the smaller businesses across the chain cannot absorb such increases—there’s a breaking point for processors.” 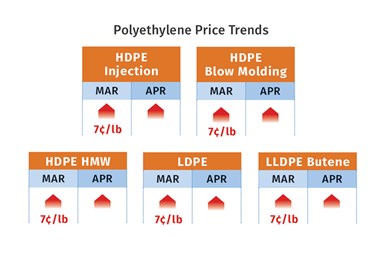 Barry ventured that ethylene monomer contract prices would start coming down in April and that there may well be some PE price corrections in May or June. “I see spot prices dropping and a flat pricing scenario for May-June, with some possibility of lower prices in June—all depending on demand. Barry also noted that global PE prices were beginning to soften and that North American PE suppliers will need to return to the export market—which has accounted for over 30% of their production in recent years, and consequently will have to lower prices.

Greenberg, Barry and Scott Newell RTi’s v.p. of PP markets, all expected another drop in April monomer contracts. Barry ventured that it could be another double-digit drop. And this month, Newell expected volatility to return for the monomer: “It could be the Wild West for monomer prices, similar to what was taking place even before the February freeze. Polypropylene suppliers will need to increase operating rates to the low 90s percentile for the rest of the year to meet demand. The problem is that monomer production may not be able to keep up and prices will go up.”

Both Newell and Barry estimated that PP suppliers need to rebuild inventories by around 800 million lb in order for the market to recover. While plant operating rates had dropped to nearly 70% by March, about 75-80% of resin production units had restarted though, not all were running at full capacity. Said Newell, “We have a long road to go, as inventories are down across the entire industry chain from monomer to finished goods.” 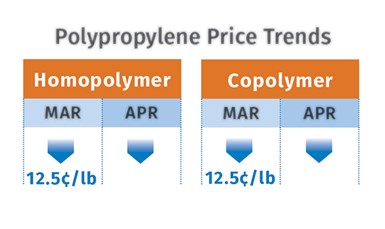 All three sources noted that despite significant PP price hikes, the demand destruction that everyone expected had not yet occurred. “So far, PP demand has been robust, despite historically high prices,” reported Barry. “Import arrivals are expected to pick up over the next 30 days, but volumes are not expected to be large enough to significantly alter the overall supply/demand balance. Some suppliers reported inventories at 20 days, 10-15 days below normal.” Greenberg reported that the shortfall was being met in the spot market despite high spot prime resin prices.

Polystyrene prices moved up 9¢/lb in March while suppliers also announced another 9¢/lb for April. At least part of that additional increase was likely to succeed, due to resin and global monomer tightness, according to PCW’s Barry and Robin Chesshier, RTi’s v.p. of PE, PS, and nylon 6 markets. They saw some potential for more stability this month.

Chesshier noted that the April increases would constitute an unprecedented sixth consecutive increase in PS prices. Demand, while not robust, has been pretty good, adding further pressure on tight supplies. Feedstock costs also supported price hikes, led by benzene contracts approaching $3/gal and styrene monomer at record levels of 85¢/lb. However, Chesshier ventured that feedstock prices could drop just as fast as they rose, perhaps as early as this month, as global feedstock prices have been subsiding. 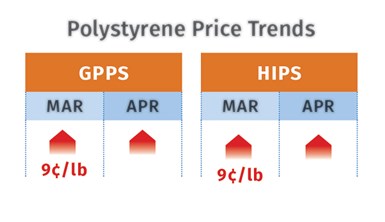 Similarly, Barry ventured that a significant price correction was likely to take place for styrene monomer as three Houston-area monomer plants were expected to be up and running. But, he noted that it would take an additional two-to-three weeks before the new monomer supply reached downstream PS plants. The implied styrene cost based on a 30/70 ratio of spot ethylene/ benzene was at 47.9¢/lb up 2.6¢/lb over a four-week period going into April. He also noted that the forward curve for benzene was in a downward direction, which could contribute to some stability this month. He did note, however, that Ineos Styrolution maintained its force majeure on PS in April, and it was unclear when its allocation levels would return to normal.

PVC prices moved up 7¢/lb in March, following 7¢/lb cumulative hikes in the two previous months. Suppliers were seeking another 7¢/lb for April, and one supplier also issued a 3¢/lb hike for May, according to Mark Kallman, RTi’s v.p. of PVC and engineering resins, and PCW senior editor Donna Todd. Todd noted that the March hike brought the total increase in PVC prices for the first quarter to 14¢/lb

Kallman thought the 4¢/lb had a very good chance of going through in April but was more doubtful about the 3¢/lb for this month: “There have been resin allocations and tight supply, along with pressure from higher feedstock prices, particularly ethylene. However, planned-maintenance plant outages were expected to be resolved by this month so that supply could well be more balanced.” Nearly all of the Gulf Coast ethylene crackers brought down by the Big Freeze in Feb had restarted and were in the process of ramping up operating rates. 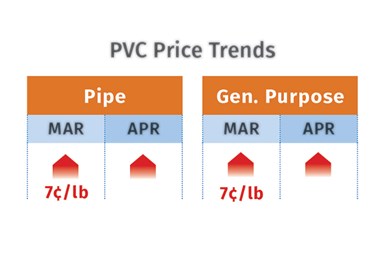 Kallman added, “While demand has continued to be strong, there is increasing concern about the nearly doubled cost of PVC products for construction.” Todd cited one converter who noted that in his 35 years in the PVC industry, he had never seen two 7¢/lb price hikes implemented back-to-back. Reported Todd, “Buyers would prefer to see the same price increase from all suppliers, as they predicted a very messy settlement otherwise.

PET prices started April at between 70¢/lb and 75¢/lb for monthly railcar contract and spot truckload business for domestically produced PET, after rising as much as 5¢/lb through March, according to PCW senior editor Xavier Cronin.

He noted that PET imports were up 98.9% in January compared with January 2020. “So, buyers able to use non-U.S.-produced resin were booking imports in the high-60¢/lb range, picked up at U.S. ports.” 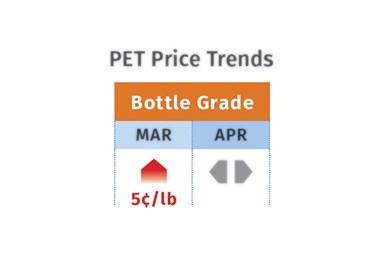 Chronin ventured that domestic PE prices would be remain at the 70-75¢/lb range through April and rise as high as 80¢/lb for May, as seasonal demand kicks in with increased sales of single-use PET bottles and containers. He reported that PET feedstock prices for PTA and MEG steadied at the start of April, after a March spike when production disruptions at some feedstock plants caused a spot shortage of PET resin for some buyers.