Part 1: The Importance of Mold Temperature When Processing Polycarbonate

An often overlooked factor in optimizing the ductility of PC is the rate at which the polymer is cooled in the mold.

Polycarbonate has been a commercial material for more than 60 years. At the time of its development it represented a significant extension of the properties that were available in a transparent material. Clear commodity materials like general-purpose polystyrene and acrylic that had been available for decades before the invention of PC tend to be brittle unless impact modified, and they lack the heat resistance that PC offers. Higher performing transparent polymers such as the family of sulfone-based materials that were developed after the introduction of polycarbonate are typically not water white and also exhibit greater notch sensitivity even though they display good inherent ductility.

PC, therefore, occupies a niche that has allowed it to grow to a level of global consumption that is approaching 10 billion lb. As such, it represents a little over 1% of all the plastic that is consumed worldwide in a given year. However, those involved in failure analysis will tell you, anecdotally at least, that approximately 15% of the failed parts that they evaluate are made from PC. And despite its reputation as a “bulletproof” material, many of the fracture features we observe under the microscope are brittle.

This is not an indictment of the polymer. It is, however, an illustration of how things work when the real world collides with the expectations of designers and engineers that are based on published properties. One of the most well-known performance characteristics of PC is a property that is always included on the data sheet: the notched Izod impact resistance. PC routinely registers values of 12-18 ft-lb/in. (640-960 J/m). Most polymers fall well short of these numbers. If they do approach them, they usually do so because they rely on impact modifiers and consequently sacrifice strength and stiffness. But there are many influences that can erode the impressive numbers that contribute to the reputation of polycarbonate as one of the toughest polymers on the market. 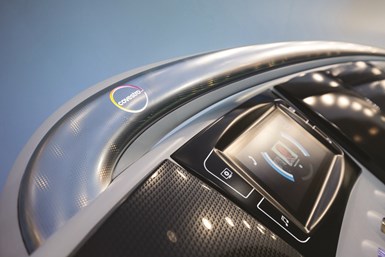 Polycarbonate has an established history of being utilized in innovative applications in the E/E and automotive arenas. On the horizon for the material are applications in new “e-mobility.” Photo; Covestro

Probably the best known of these is sensitivity to a wide range of chemicals. These promote chemical attack or environmental stress cracking (ESC). At NPE 1979 one of the major manufacturers of PC at that time devoted a significant amount of floor space to demonstrating the impact resistance of a PC front bumper for automobiles. The bumper was put through a very impressive demonstration of its toughness several times each day. The application never happened in the real world, largely because of the number of fluids that are part of the automotive end-use environment. The final material of choice, at that time, was an alloy of PC and polyester, with the semi-crystalline polyester providing the needed chemical resistance.

The addition of color can have a substantial effect on the toughness of the base resin. The degree of change in impact resistance will depend upon the color, the chemistry chosen to create it, and the amount of colorant added. The effects on ductility are more noticeable in specimens that are notched than in those where no stress concentration is present. The molecular weight of the PC being colored will also influence how the impact performance of the material is affected by the color. Higher-molecular-weight grades preserve their impact properties better than lower-molecular-weight grades, especially in the case of opaque colorants.

The addition of color can have a substantial effect on the toughness of the base resin.

Many industry practitioners are also aware of the fact that PC is sensitive to the effects of moisture at elevated temperatures. This can cause problems for molded parts that are exposed to high heat and high humidity at the same time, such as in the so-called 85/85 test for electronic enclosures that involves 1000 hr of exposure to 185 F (85 C) and 85% relative humidity. While neither this temperature nor this level of humidity alone presents any challenges to the performance of polycarbonate, the combination will produce a substantial reduction in the molecular weight of the polymer.

One of the most notable early failures of PC came in the small-appliance industry when the material was molded into parts that routinely handled hot water. The short-term effects of this application environment were negligible. But over time with repeated exposure the material began to embrittle and crack. The same mechanism, known as hydrolysis, will take place very rapidly if the polymer is processed without first properly drying the resin. What occurs over hundred of hours in the solid state takes place far more rapidly when excess moisture in the pellets is exposed to processing temperatures of 536-608 F (280-320 C)for several minutes. The resulting polymer degradation reduces the ductility of the polymer.

But an often-overlooked factor in optimizing the ductility of PC is the rate at which the polymer is cooled in the mold. Many years ago, I had a client that perennially complained about its brittle PC parts. The client blamed this on the resin manufacturer initially, and when the client did finally turn its attention inward, it focused on drying as the key to improving performance. While this was good, it did not solve the problem. The missing piece was the mold temperature. This processor that molded parts for its own product line, routinely ran its molds at 110-120 F (43-49 C) in order to minimize cycle times. Several times, it was demonstrated that when the parts were produced in molds that ran at 180-190 F (82-88 C) the parts displayed excellent toughness. This was done with no penalty in cycle time. But old habits can be hard to break, and soon after the changes were made, technicians within the plant intervened, turning the mold temperatures back down and reintroducing the brittle condition.

Lower mold temperatures and the associated faster cooling rates produce higher levels of internal stress in the molded part. This arises in part because of the more rapid development of the frozen layer as the material flows into the mold. This can result in flow lines that are visual evidence of impeded flow. It also produces a higher degree of retained orientation in the more rapidly cooled layers at the exterior surface. Orientation is useful for promoting shear thinning and reducing the viscosity of the material as it flows into the cavity. But if too much of the orientation is retained in the final part, the properties become anisotropic, maximizing strength and stiffness in one preferred direction but creating a weaker condition in other directions.

An even larger contributor to internal stress is the difference in cooling rate between the layer of material that is in direct contact with the mold surface and the interior material. Plastics are poor conductors of heat. Therefore, the interior layers in a part cool more slowly than the surface layers. Running a low mold temperature exaggerates this difference in cooling rate. Variations in the cooling rate in the different layers of material that make up a part produce differences in shrinkage. This problem becomes magnified as the walls get thicker. This shows up as a phenomenon known as critical thickness, a property particularly well documented in polycarbonate. This behavior is observed as a very large reduction in notched Izod impact resistance as the wall thickness of the test specimens increases.

All this supports the argument that hotter molds produce parts with better properties, even in an amorphous polymer like PC where there is no expectation that a crystal structure has time to form. But what is the optimal mold temperature? In our next segment we will cite case studies where mold temperature was used to improve performance as a way of answering that question.

About the Author: Mike Sepe is an independent, global materials and processing consultant whose company, Michael P. Sepe, LLC, is based in Sedona, Ariz. He has more than 40 years of experience in the plastics industry and assists clients with material selection, designing for manufacturability, process optimization, troubleshooting, and failure analysis. Contact: (928) 203-0408 • mike@thematerialanalyst.com.