Interdental brushes with up to 500 tiny bristles are molded in 8 cavities.

The Austrian parent of Engel Machinery Inc., York, Pa., revealed an early peek at its NPE2018 plans (booth W3303). Though not a complete listing of what will be on display, Engel described these manufacturing cells, the newest of which is described first:

• LSR auto cavity balancing: Engel says this is the first time it has molded automotive headlight lenses at a trade show. These products (with light-guide technology) are said to be particularly complex (photo) and require a high degree of precision and stability in molding. They will run on a 120-ton, tiebarless, all-electric e-victory machine with a metering/pumping system and two-cavity mold, both from ACH solution in Austria. The mold uses a new ServoShot cold-runner valve-gate system from ACH solution, with valves that are pneumatically actuated but the pin strokes are set electrically. All the valve gates open together; varying the pins’ open positions adjusts the flow through each valve gate. Parts will be checked via integrated camera inspection and will be weighed individually. The ServoShot software then will adjust the pin openings to balance the fill and equalize the weights in the cavities. The entire cell, including LSR dosing, is handled by the Engel CC300 controller.

• In-mold decorating: For the first time in North America, Engel will present a fully automated cell for the DecoJect process (also shown at K 2016 in Dusseldorf; see Aug. ’16 Close Up.). Aimed at auto interior trim, it involves a thin TPO film, fed from a continuous roll, which is back-injected with PP and punched out of the roll in the mold. A final laser trim occurs after demolding. The film imparts color, gloss, texture, and feel—allowing production of a variety of parts simply by changing films. The cell utilizes an Engel duo 1100-ton two-platen press, an Engel viper linear robot, and Engel easiCell with easix articulated robot and laser-cutting station.

• High-speed cap molding: Engel is showing off the capabilities of its all-electric e-cap system with a 460-ton model molding 26-mm HDPE beverage caps with tamper-proof bands in a 96-cavity mold on a 2-sec cycle. For historical perspective, two NPE’s ago, Engel ran water-bottle caps in 96-cavities on the same size e-cap machine in 2.7 sec.

• Interdental brushes in one shot: Engel will also demonstrate a tricky piece of molding for the medical arena: eight interdental brushes, each with up to 500 tiny bristles, and a total shot weight of only 1.93 g. A single material (not identified) replaces three components—a grip surface, wire mesh, and the filaments. An all-electric e-motion 121-ton press will use a  collection of Engel’s latest “intelligent” software: iQ weight control to adjust the process for consistent shot weight, iQ clamp control to automatically set the optimum clamp force, and iQ flow control to optimize mold cooling—which is seeing its North American debut at NPE (more details in a separate item in this section). This cell also ran at K 2016 (see Sept. ’16 feature).

• Integrated metal/plastic processing: For teletronics, Engel will produce thermal switch housings (used to monitor electric motors in cars or home appliances) in a cell that starts with feeding thin brass sheet from a coil through a punch press, where the brass carrier plate also has a thread servo-electrically tapped. The carrier plates, still on a continuous reel, are fed into a vertical, 38.5-ton Engel insert press for overmolding with glass-filled nylon. Camera inspection and high-voltage testing integrated into the tool ensure 100% quality control. Eight finished parts leave the cell every 20 sec. (This cell was also shown at Fakuma 2015.). 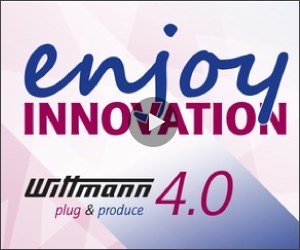